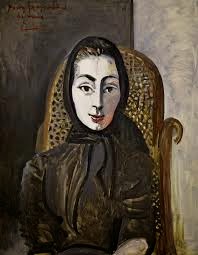 The end of the Fall Art Season is quickly approaching as the old year fades into the new.
Here is the list of  important Fall 2014 shows closing in January, February and March 2015. 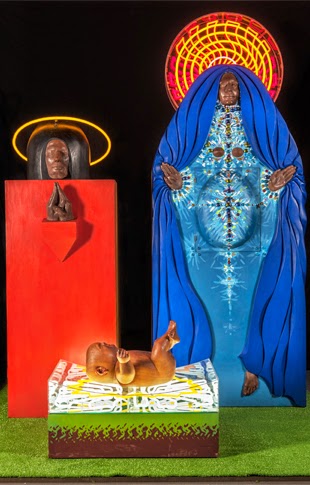 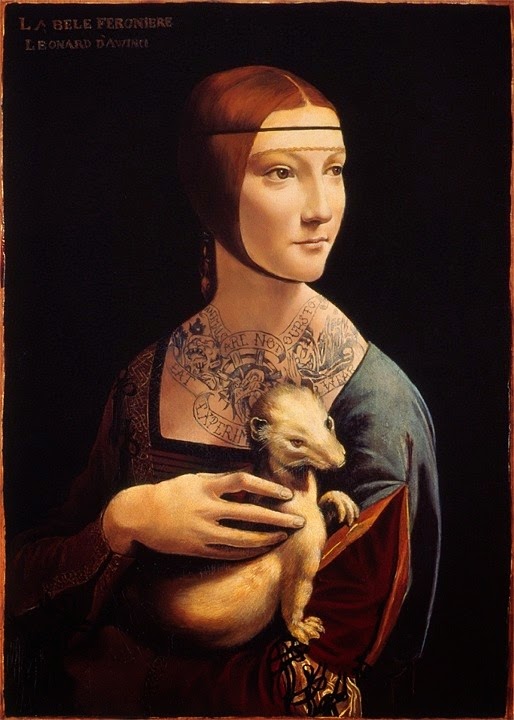 Kathleen Gilje, Woman with an Ermine, Restore, 1997
at the National Academy,
Courtesy of  Francis Naumann Gallery and the artist
All rights reserved 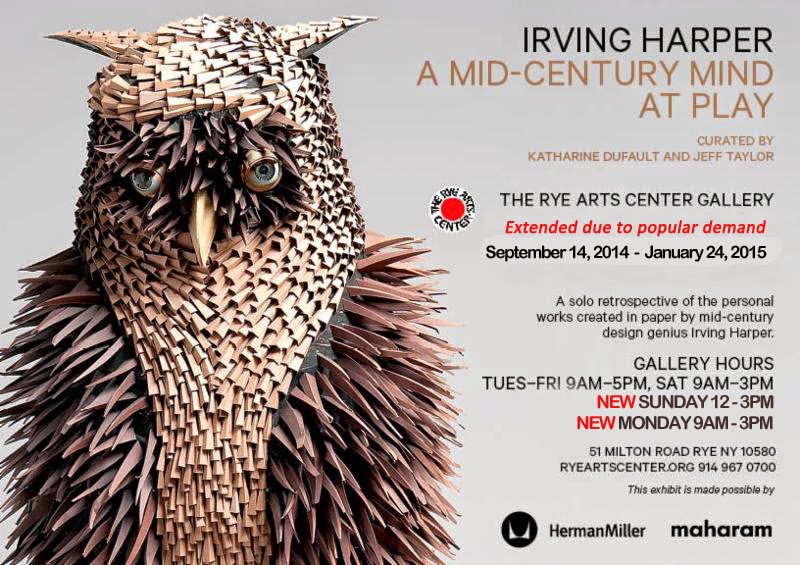 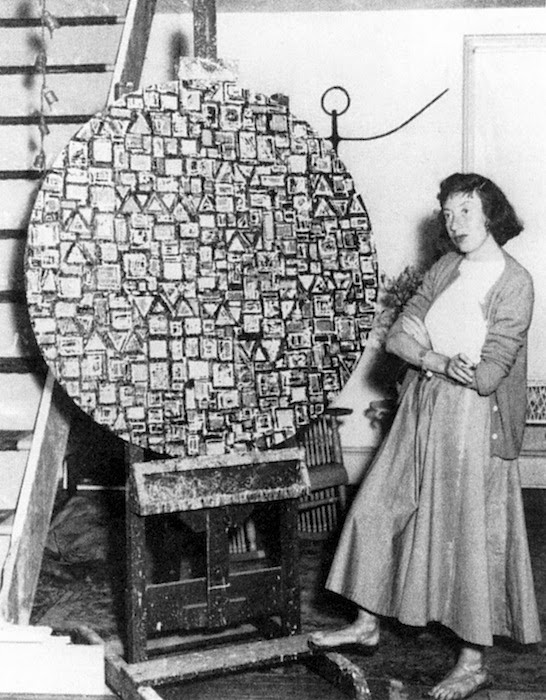 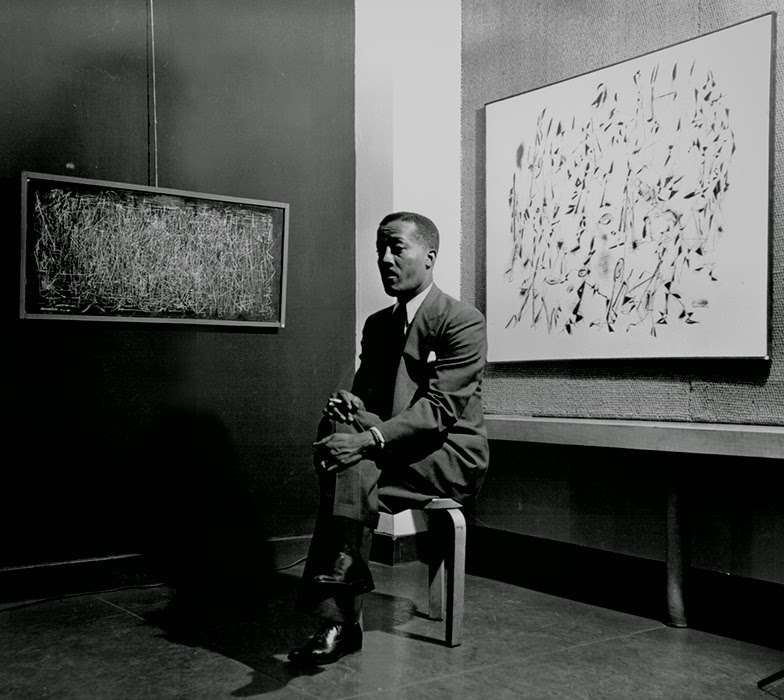 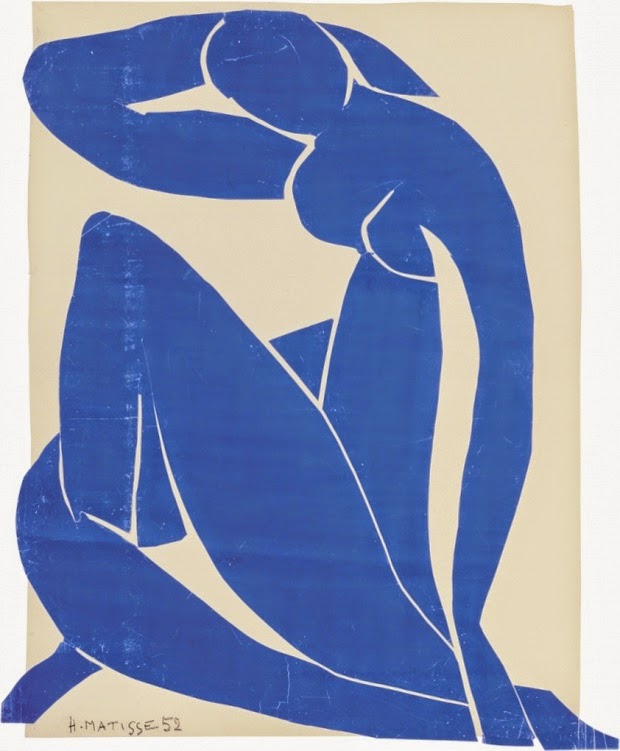 Posted by nyarts-exchange at 9:09 PM 2 comments: 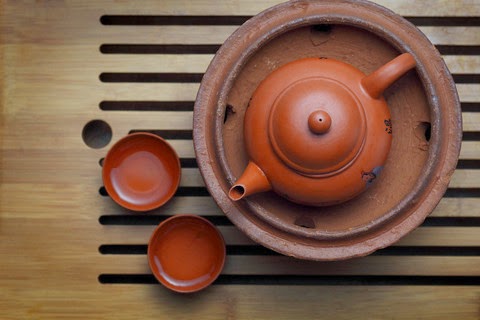 Posted by nyarts-exchange at 8:15 PM No comments: 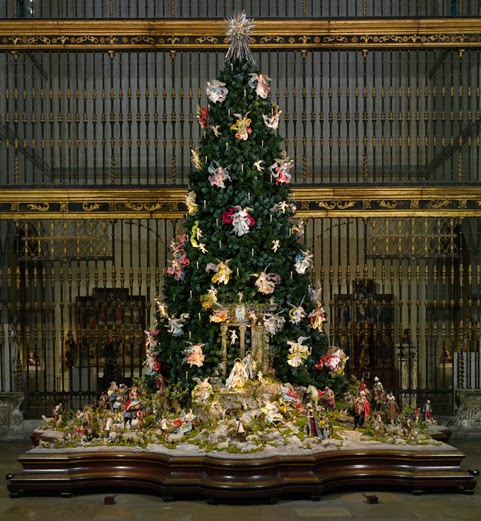 18th Century Neapolitan ornaments on the  Metropolitan Christmas Tree
Collected by Loretta Hines Howard since 1925 and on view since 1957,
over 200 figures were donated in 1964;  Linn Howard, Loretta's daughter,
still dresses the tree with her daughter, Andrea Selby
Made possible by gifts to The Christmas Tree Fund and the Loretta Hines Howard Fund.

The Metropolitan Museum's Christmas Tree is a seasonal favorite. Fully decorated by Thanksgiving Weekend, it remains one of the time-honored traditions for New Yorkers and visitors, who seek out the best holiday displays all around the town. This year the tree will be on view through January 6th: Epiphany. 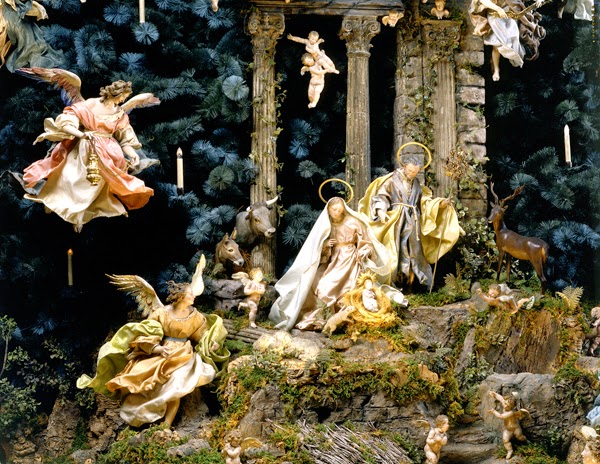 As we look at this magnificent  Baroque Nativity scene, arranged at the front of the Metropolitan's Christmas Tree, we might wonder when the Nativity scene in art began.  According to contemporary literature on the subject, we believe that the earliest Nativity scenes appear on sarcophagi in the 4th century, when Emperor Constantine permitted public worship and the building of churches:

In the East, Byzantine depictions follow the description of Christ's birth found in the Gospel of James, which sets the joyous occasion in a cave: 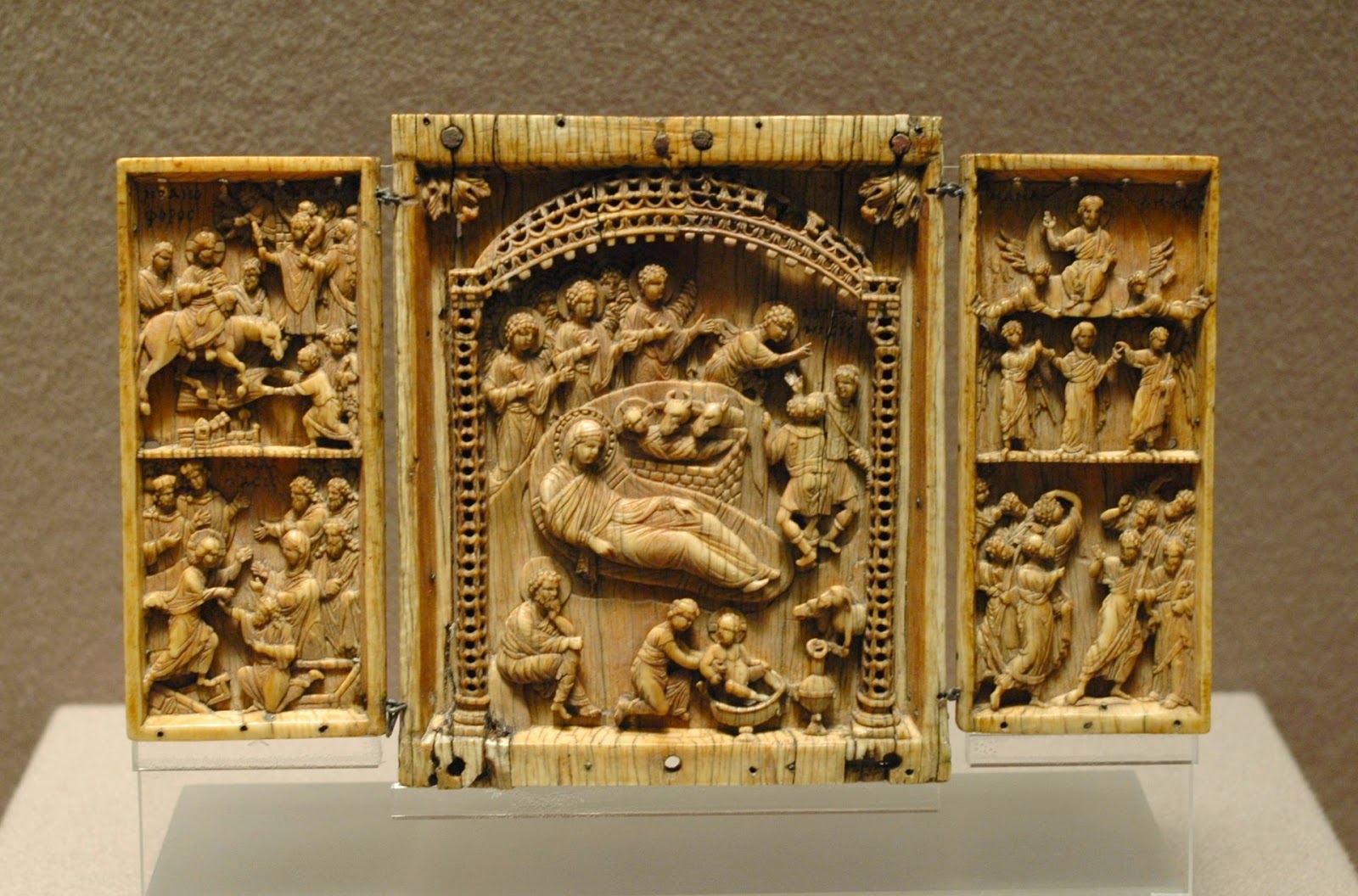 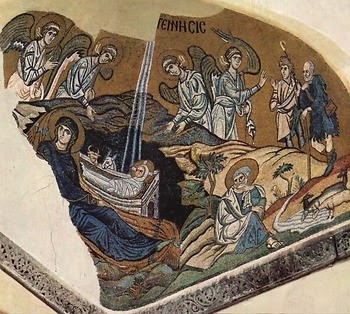 Later artistic interpretations relied on the Gospel of Luke and Matthew, in which the birth takes place outside an inn and the Christ Child is placed in a manger. 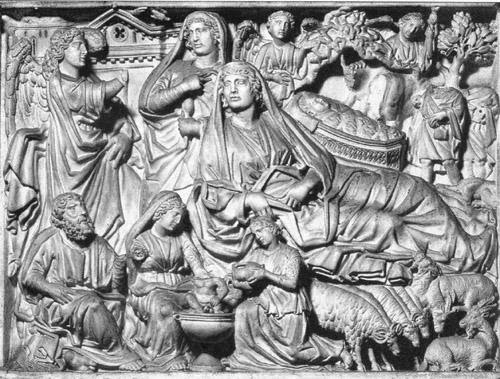 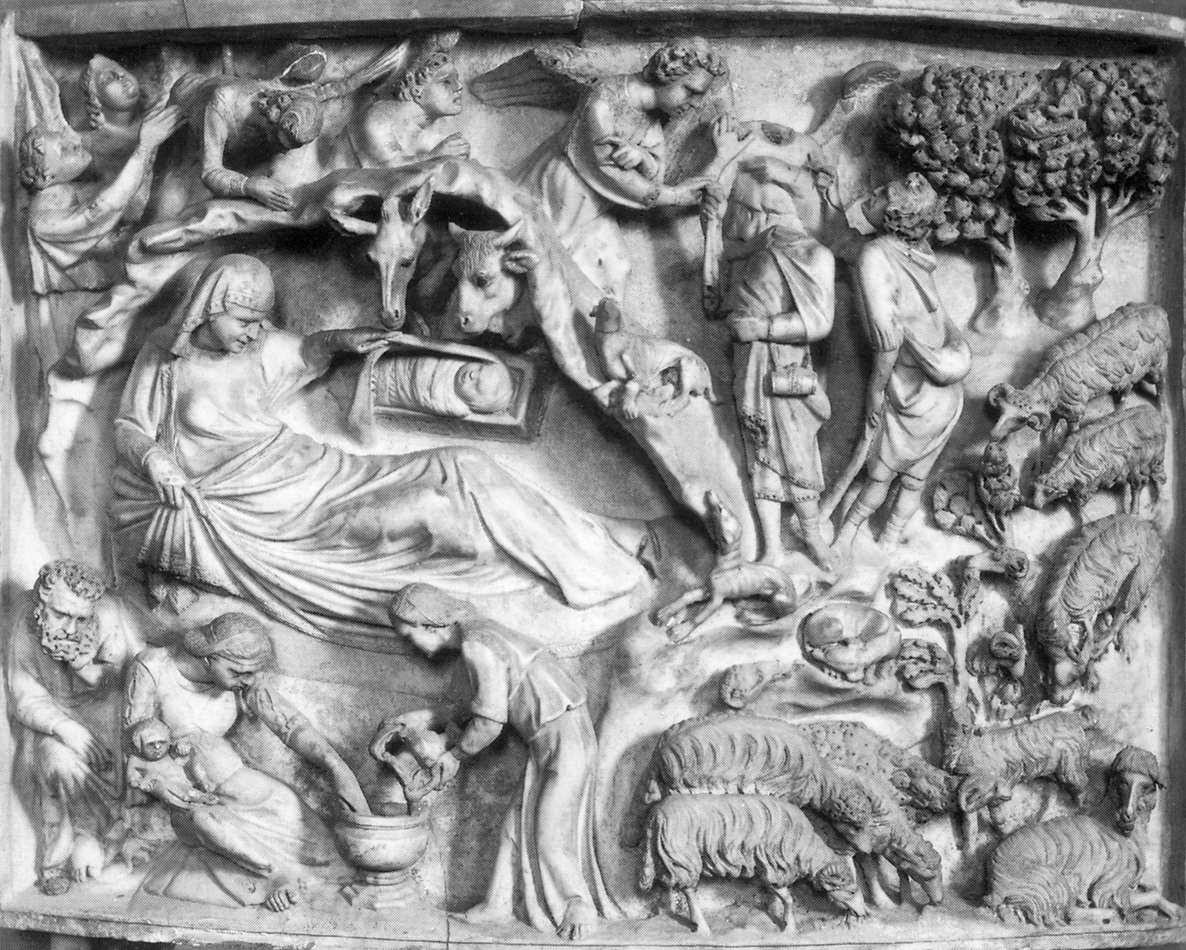 Early Netherlandish and other late medieval works in northern European found inspiration in the 14th century visionary texts of St. Bridget of Sweden, who described  the Virgin Mary kneeling over the Christ Child laying on a bed of straw, radiating light: 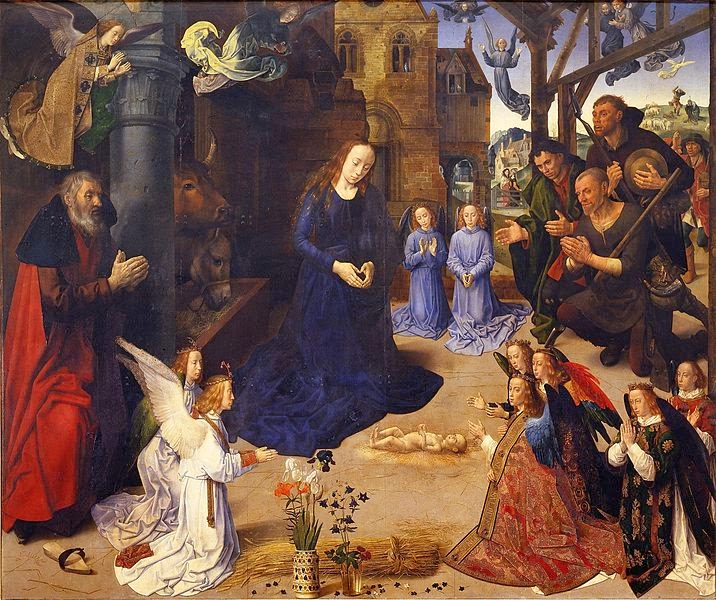 The mystery and miracle of Christ's birth finds several expressions in the history of art - peace and love, exultation and song, spiritual meditation and faithful devotion: 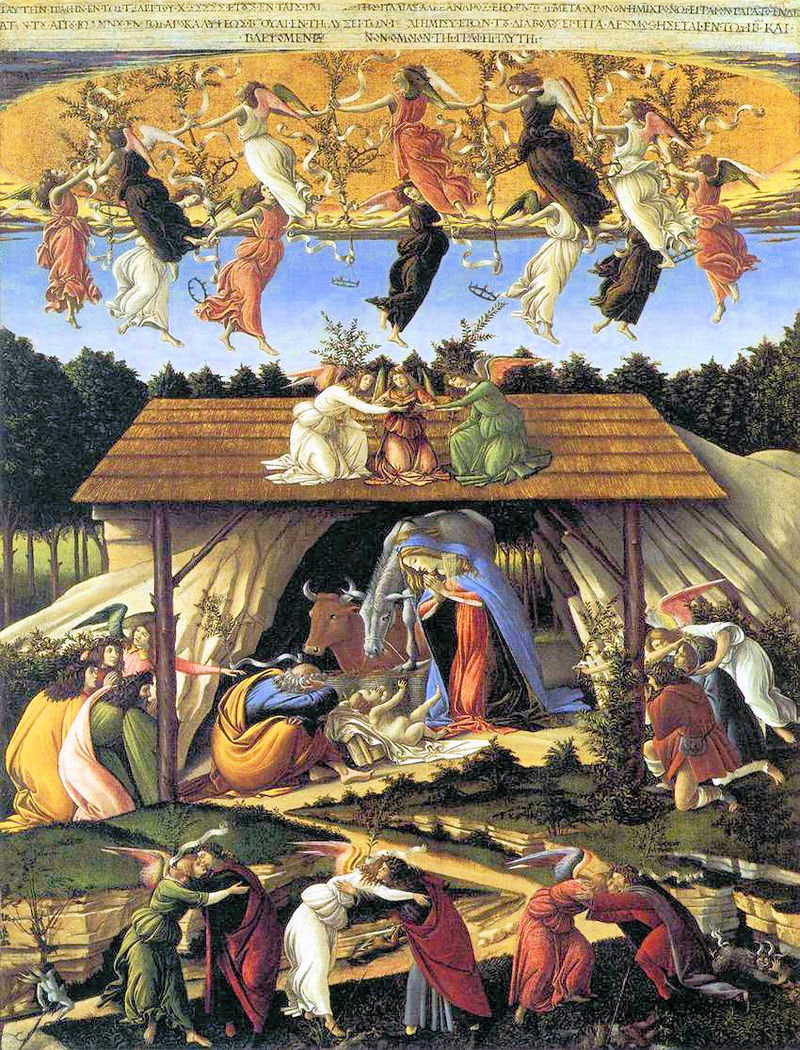 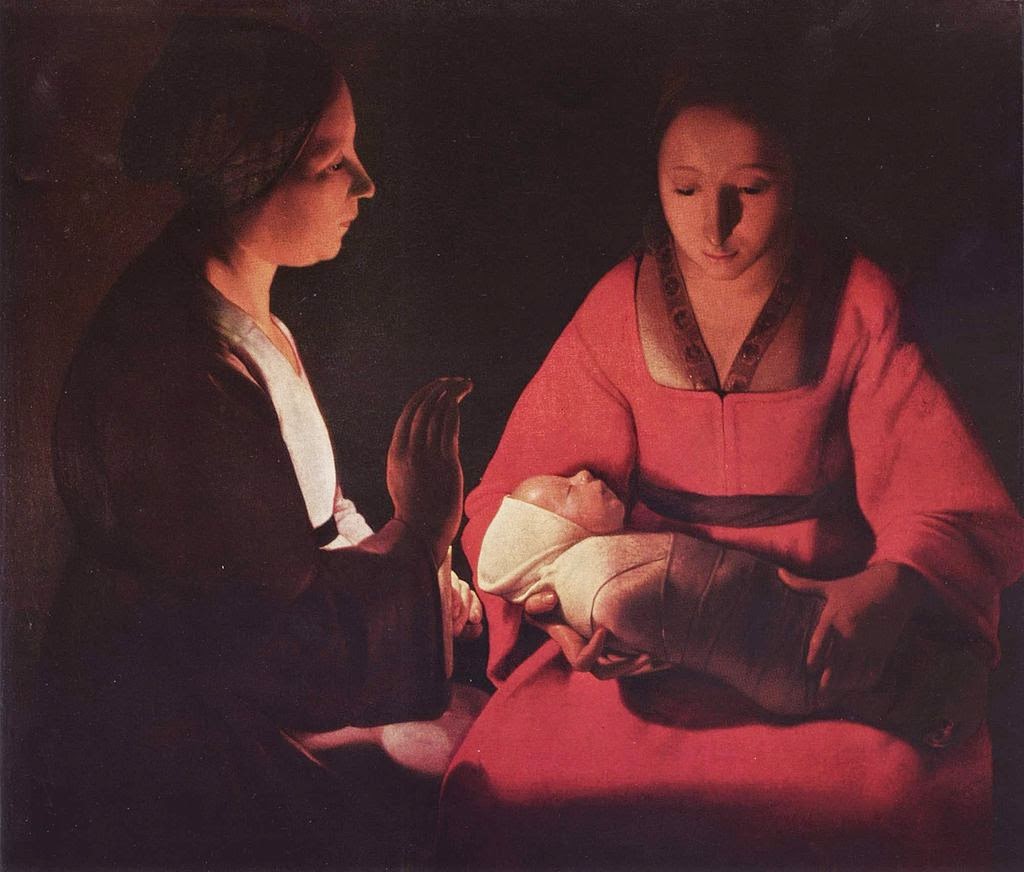 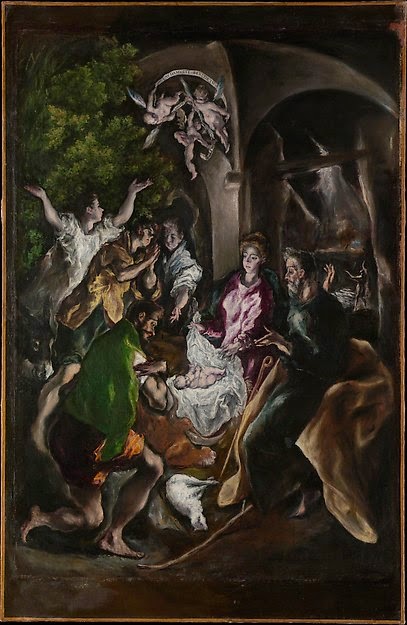 El Greco (Domenikos Theotokopoulos), Adoration of the Shepherds, 1605-10
Metropolitan Museum of Art (part of the El Greco exhibition through February 1) 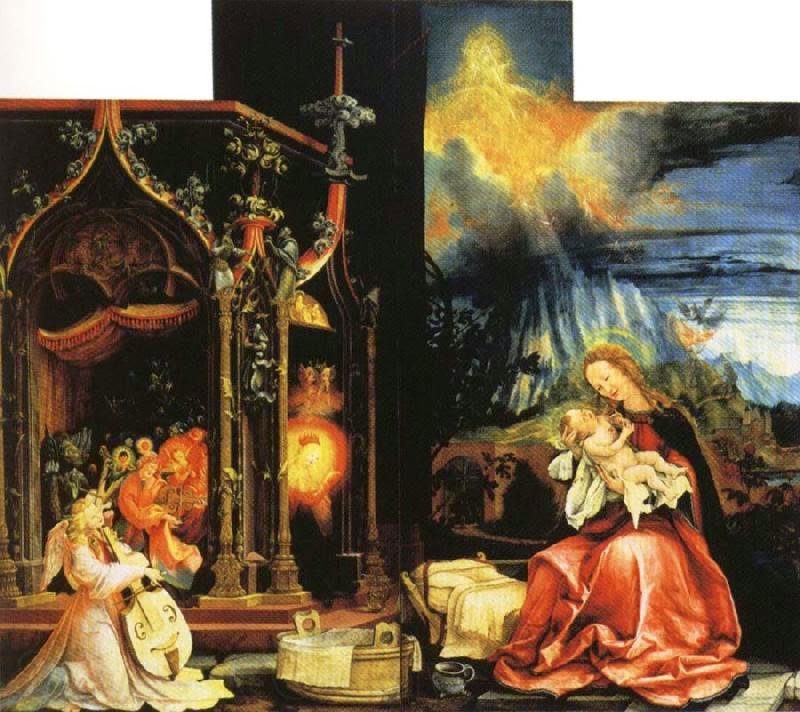 from all of us at
New York Arts Exchange 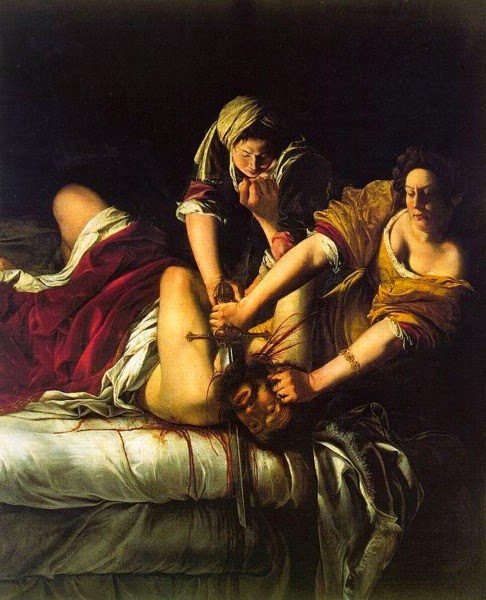 T'was the 5th Night of Hanukkah and all through the house,
Cheese blintzes scent the kitchen
Sour cream delights the mouth.
Dairy products recall the courage of Judith
Who fed Holofernes cheese and wine
Then smote him to save the Israelites
In Bethulia, way before Antiochus IV's time.

The story of Judith of Bethulia who beheaded the Assyrian general Holofernes belongs to the Hebrew Bible's Apocrypha, right next to the chapters on the Maccabees, which tell the story of Hanukkah. We imagine that Judith's selfless act foreshadows the triumph of the Maccabees.

Here is the story of the Maccabees and Hanukkah.

Here is the story of Judith and Holofernes on Arthistory.about.com,
And here is a video about Judith and Hanukkah.

Plus - more works of art that feature Judith: 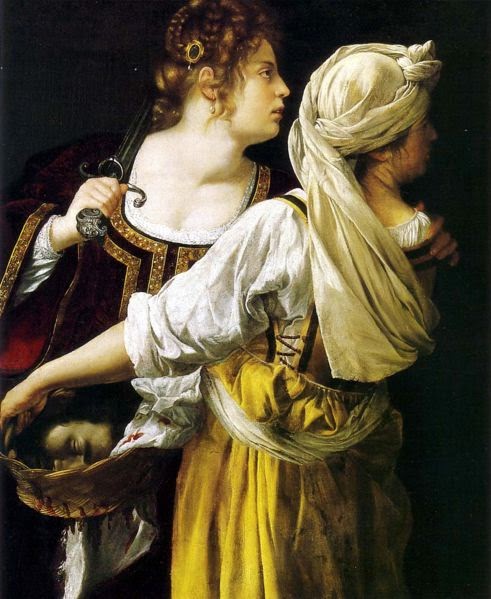 Artemisia Gentileschi, Judith and her Maidservant, 1612-13 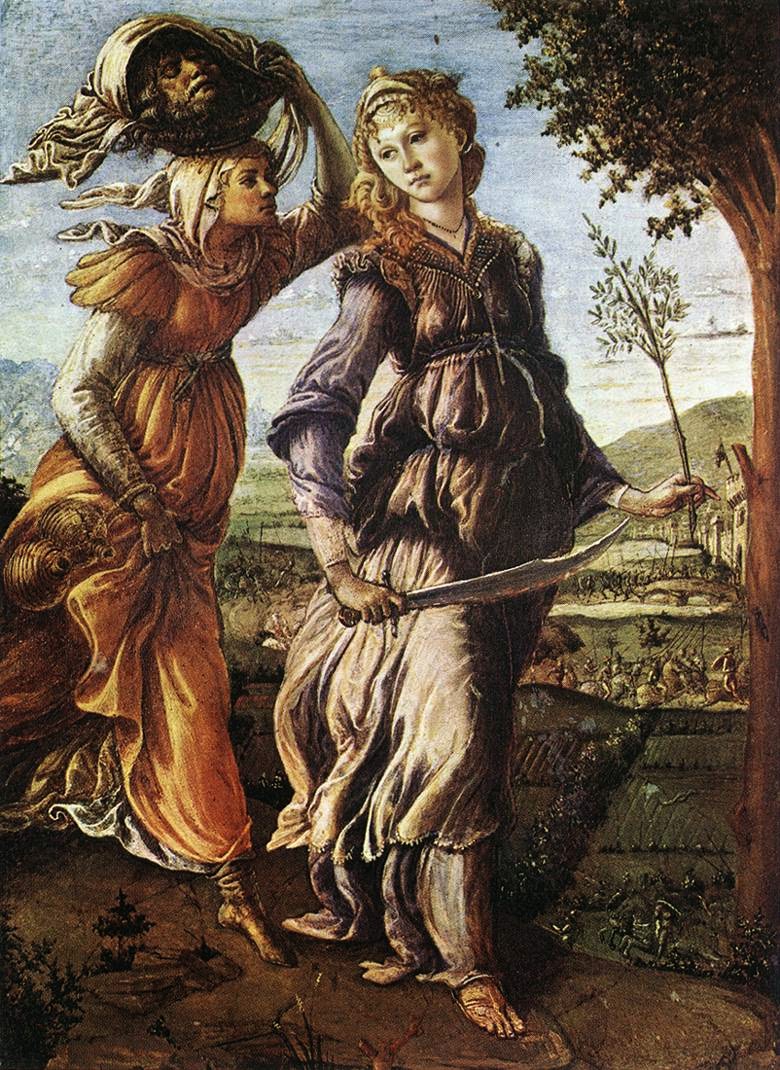 Alessandro Botticelli, Judith and Her Maidservant, 1472 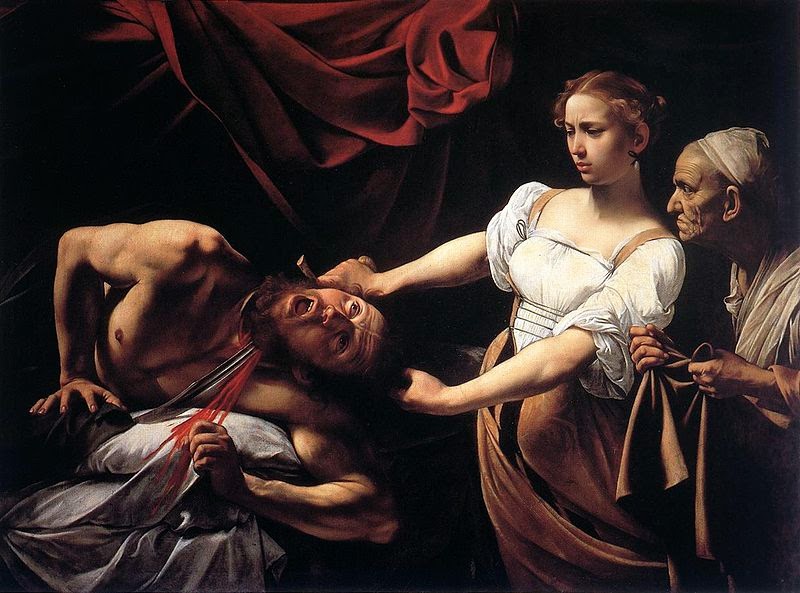 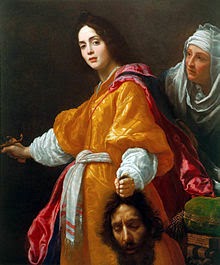 Cristofano Allori, Judith and the Head of Holofernes, 1613 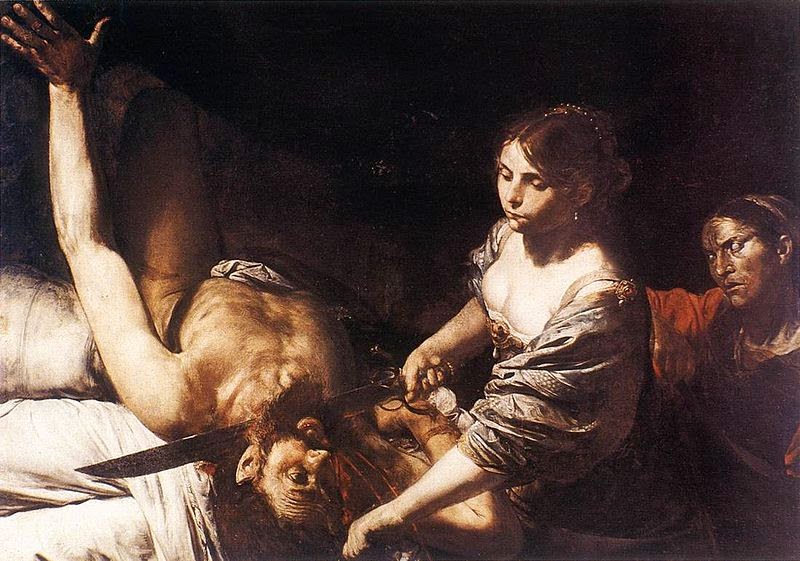 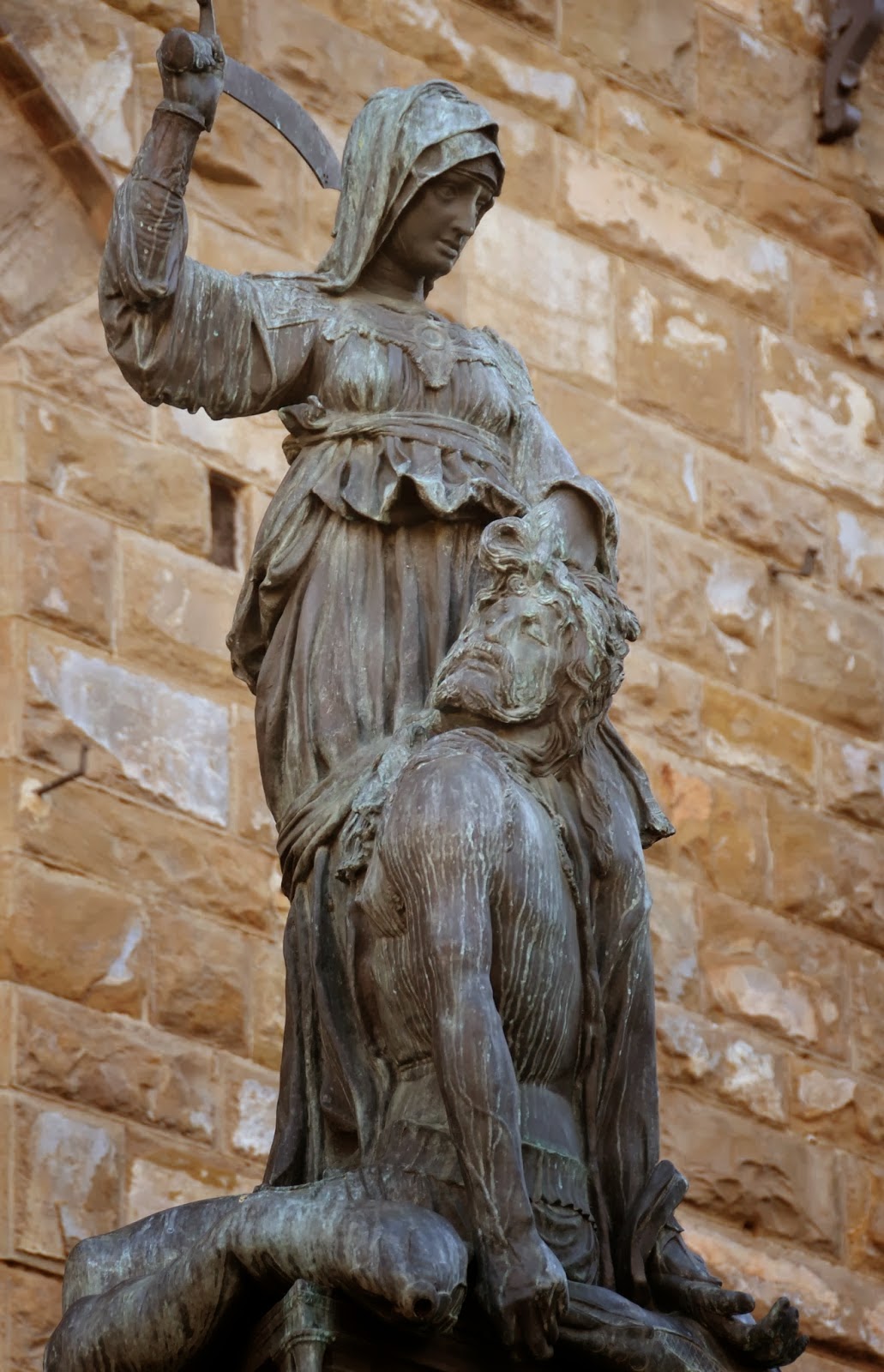 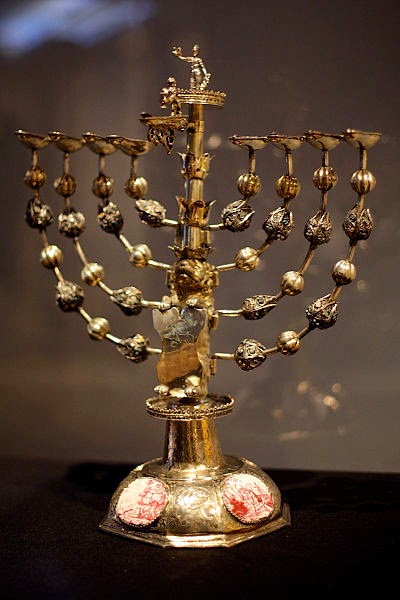 Happy Hanukkah to all and to all a good 5th night,
Beth New York

Posted by nyarts-exchange at 6:31 PM No comments: 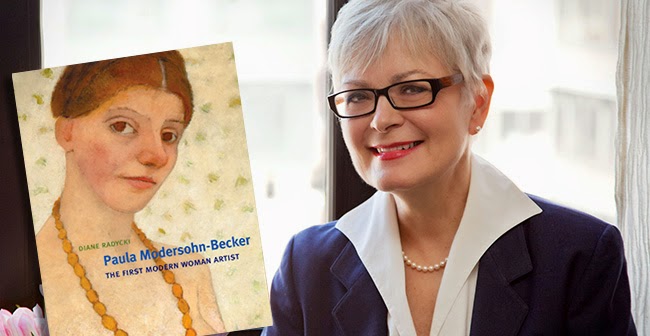 
The New York Arts Exchange is pleased to offer an exclusive opportunity to meet Professor Diane Radycki, associate professor of art history at Moravian College and the director of Payne Gallery, for a private lunch and conversation about Paula Modersohn-Becker.  Professor Radycki has just returned from the opening of the Modersohn-Becker Retrospective at Louisiana Museum of Modern Art, in Humlebaek, about 22 miles outside of Copenhagen, Denmark.  She will tell us about her work on PMB and the current exhibition - a virtual trip to Louisiana in the heart of NYC.


Please join us for this exceptional occasion - and holiday celebration as we end our 2014 Fall Tour Series.


We look forward to sharing this wonderful event with you -
Best wishes for the holidays,
Beth New York

Posted by nyarts-exchange at 6:54 PM No comments: