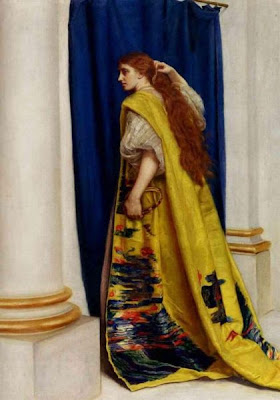 Today is Purim, the Feast of Esther, which celebrates the courage and clever wiles of a young woman who was asked to save her coreligionists (the Jews) from annihilation. On Purim, one donates to those in need, delivers gifts of sweets to friends and family, and celebrates at a festive meal - with permission to drink until "one cannot tell the difference between Mordecai and Haman."

The story of Esther begins with her predecessor Queen Vashti, who refuses her husband King Ahauserus' summons to appear before his guests at his banquet to celebrate seven years as the ruler of the Persian Empire.

The king's angry advisers insist that her insubordination should not be tolerated. Vashti is sent into exile. 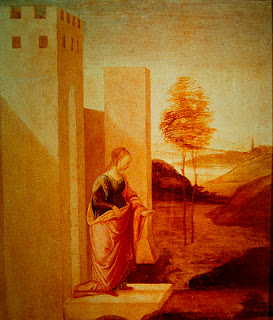 Lonely without a queen, Ahasuerus calls all the eligible maidens to his palace to compete for his favors. Hadassah, a Jew, answers the call at her cousin-guardian Mordecai's urging, but she changes her name to Esther ("star" in Persian) to mask her ethnic identity. After a year of preparation for her night with the king, she adores herself with little more than her charms. 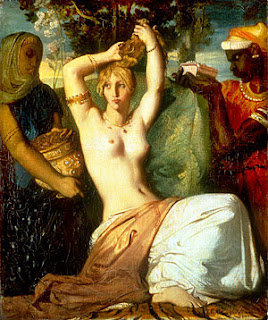 Esther's beauty and grace enchant the king. She becomes his bride: 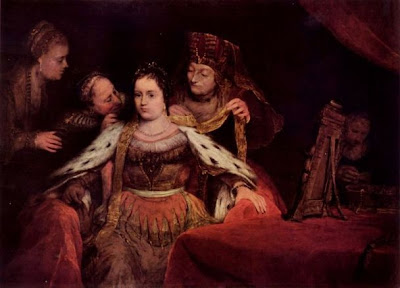 Unfortunately, her happiness hits a snag.  Mordecai  refuses to bow down to the king's prime minister Haman. Again, insubordination has its price. Haman seeks revenge and  arranges for the death of all Mordecai's coreligionists, the Jews, on the 15 Adar (chosen by lots - "purim") and seals the deal with the king's stamp.

Mordecai contacts Esther through a messenger to ask for her intervention. 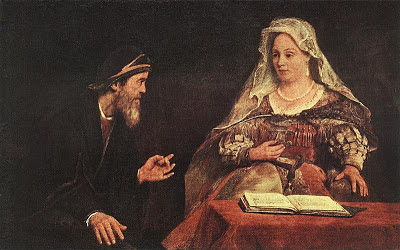 Esther enters the king's throne room with her servants and finds the king happy to receive her. He encourages her petition and she cleverly invites him to her private chambers for a small banquet in his honor.  The guest list is short: Esther, Ahasuerus and Haman. The meal pleases the king and Haman. She invites them to another dinner party the next day.

That night the king cannot sleep and has his servants bring his book of chronicles to lull him to slumber. The record of deeds includes Mordecai's report of a plot against the king.  The king calls Haman to his bedchamber to consult on a fitting gesture for "a man who has honored the king."  Crafty Haman assumes the triumphal procession will be for himself.  Instead, Haman ends up leading Mordecai mounted on the king's finest horse through the streets of Susa announcing "this is what becomes of those who honor the king."

The next night, at Esther's second banquet, the king compliments Esther profusely and pledges all manner of gifts to her to express his gratitude. She points to Haman to expose his evil intentions. The king is incensed and leaves the room to cool off.  Haman falls to his knees before Esther to plead for his life. The king returns to see his prime minister touching his wife's hem, which inflames the king's ire to a greater degree. Haman is sentenced to death on the gallows he prepared for Mordecai's public execution on the 15 Adar.

Jan Steen, The Wrath of Ahasuerus, 1668
Cleveland Museum of Art

Mordecai becomes the prime minister in Haman's place. Then the king permits the Jews to defend themselves on the 15 Adar, as he cannot repeal his own law. Mordecai and Esther draft a law to remember this day.

The celebration of Purim follows this law and inspires courage in the face of circumstances that seem beyond our control.

What can you do to make the world into a better place for everyone?  Think of Esther and give it your best shot.

Chag Sameach - and Happy Oscar parties to you all,
Beth New York

Posted by nyarts-exchange at 10:09 AM No comments:

More On Duchamp by Francis Naumann 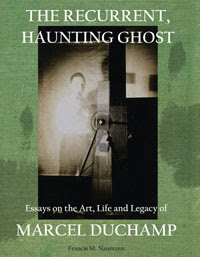 Francis Naumann Fine Art's current exhibition Marcel Duchamp's Nude Descending Staircase; An Homage follows hard on the heels of Naumann's latest publication, The Recurrent, Haunting Ghost: Essay on the Art, Life and Legacy of Marcel Duchamp (2012) and his wonderful Fall exhibition Duchamp Brothers and Sister: Works of Art, which featured paintings, drawings, sculptures and other printed materials about this famous family (the first of its kind since 1952).  A review of the show was published in the New York Times. 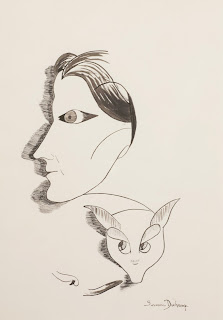 
Please note that this self-portrait of Suzanne Duchamp accompanies the NYT review.  It was originally identified as a portrait of Marcel Duchamp.  However, while Francis Naumann gave our New York Arts Exchange group a tour, our own NYAE member Debora Reiter Sakkal pointed out that the face looks similar to a photograph of  Suzanne (placed next to the portrait in the exhibition).  Francis Naumann, one of the world's Duchamp authorities, listened attentively and agreed.  Bravo, Debora!

Other works in Duchamp Brothers and Sister were:


Duchamp Brothers and Sister closed in January 2013.  Marcel Duchamp's Nude Descending Staircase: An Homage remains on view through March 29th. Catch it before it's too late.

Posted by nyarts-exchange at 1:10 PM No comments: 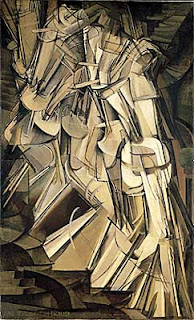 Neither sufficiently Cubist nor Futurist, Marcel Duchamp's Nude Descending Stairs, No. 2, failed to satisfy the high priests of Cubism (Albert Gleizes and Jean Metzinger?) presiding over the Salon des Indépendants of 1912. Informed that his painting should be withdrawn, Duchamp quietly took his Nude back home in a taxi and said nothing to his brothers, Jacques Villon and Raymond Duchamp-Villon, who also served on the hanging committee and exhibited in this Cubist-dominated show.

The experience was life-changing.  Duchamp no longer felt obliged to follow in his older brothers' footsteps as part of the Cubist movement.  An art-star was born.

Duchamp's large canvas (57 7/8 x 35 1/8 inches) did appear in the October 1912 Cubist exhibition La Section d'Or, where Walter Pach discovered the work and recommended it for his modernist show scheduled to open in New York the following year. There Nude Descending Staircase, No. 2 managed to launch an historic revolution in America as it took center stage in the famous Armory Show (held in the 69th Regiment Armory  located on Lexington Avenue at 25th Street), which opened to the press on February 15, 1913 - one hundred years ago this past Friday.  It opened to the public on February 17th.

A hand-painted collotype of the Nude created for a 1937 valise given to Sidney Janis takes pride of place in Francis Naumann Fine Art's exhibition Marcel Duchamp's Nude Descending Staircase: An Homage (through March 29th) as the gallery marks this significant event in art history.  Curated by Francis Naumann, renowned Duchamp scholar, the birthday celebration boasts a passel of art-stars in their own right. 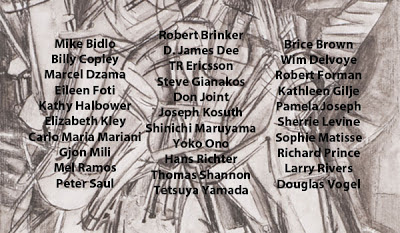 Appropriation legends, such as Mike Bidlo, Sherrie Levine and Larry Rivers, contributed excellent re-interpretations along side several surprises, including Yoko Ono's nearly 6-minute video of bare tushies in Bottoms or No. 4 (1966).

Post-Modernist Kathleen Gilje captures the Duchamp spirit in her Portrait of Andrej, Male Model as Nude Descending Staircase, after Gerhard Richter (androgynous supermodel Serbian Australian Andrej Pejic), a fitting reference to the ambiguous gender of the original moving figure. However, no spoilers here. Just see the show for yourself  - or order the catalog, if you live too far away to catch this hilarious and thought-provoking homage to Monsieur Duchamp, the nude and the staircase (passim Thomas Shannon).

To hear Marcel Duchamp explain the painting in his own words, click on the podcast Culture Shock 1913, another brilliant addition to the "Fisko Files" created by WNYC's fabulous Sara Fishko. This exceptional radio program not only explains the fury unleashed by the Armory Show's introduction of raw avant-garde Modernism to New York and elsewhere, as it toured the US, but also delves into other forms of unprecedented avant-garde creations, such as Stravinsky and Nijinsky's ballet Rite of Spring (debut on May 29, 1913) and Schoenberg's atonal music. 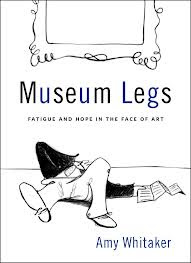 Hol Art Books, publisher of Amy Whitaker's hilarious and insightful  Museum Legs, has announced  a crowd-sourcing campaign on Kickstarter to fund its People's eBook venture: an open, free platform for publishing books.  The concept will make the publication of electronic books user-friendly and FREE to the author.  Moreover, this publishing format will encourage creativity, as it will allow for books of any length and style.  (I have a few ideas up my sleeve already.)

Hol Art Books has supported the voices of contemporary art critics and art professionals for several years,  It publishes  new editions of out-of-print older books, such as Mortimer Menpes Whistler As I Knew Him, first published in 1904 (shortly after Whistler's death), and Dorothy Dudley's translation of Venus, a description of the Venus de Milo in the Louvre by the sculptor Auguste Rodin (first published in English in 1912).  And cutting-edge commentary, such as Francine Koslow Miller's Cashing in on Culture: Betraying the Trust at the Rose Art Museum. 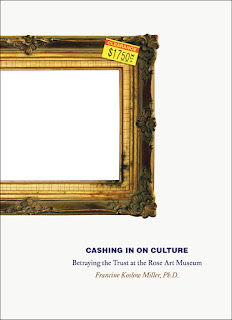 For those of us interested in the centennial anniversary of the Armory Show (opened on February 15, 1913),  Documents of the 1913 Armory Show offers a complete collection of essays generated by the show in paperback and eBook form. 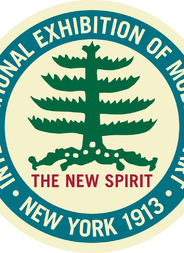 Greg Albers, founder and publisher of Hol Art Books, loves books that truly inform the reader about art and the art world (as Amy Whitaker's book surely does)   We are lucky to have this open-minded person on our side.

But don't just take my word for it: explore the project and the books on the Hol Art Books website.  The purchase of a paperback includes one eBook at no extra cost.

You will be glad you discovered this valuable source for your art-reading pleasure.

Posted by nyarts-exchange at 8:07 AM 2 comments:

"Brush," "Scent" and "Fire" at the Museum of Art and Design

Sandy Skoglund, Breathing Glass, 2000 at Museum of Art and Design

The Museum of Art and Design is "on fire" with its current exhibitions on contemporary glass design, Daniel Brush's golden objects, the art of fragrance, and Islamic treasures from Doris Duke's magnificent mansion Shangri-La. An elegant architectural space in its own right, MAD is becoming the hot spot in NYC for those in the know (especially their restaurant Robert's on the top floor with its fabulous view of Central Park).

The Museum of Art and Design, 2 Columbus Circle (at the convergence of 59th Street, Eight Ave, and Broadway).

Please join the New York Arts Exchange for a conversational tour on Tuesday, February 5 at 1 pm.
We will meet in the lobby.  $60 a la carte.   Reservations: nyarts.exchange@verizon.net