Last Call: Impressionist Alfred Sisley at the Bruce Museum through Sunday, May 21 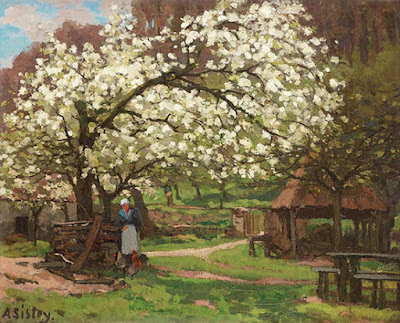 With much sadness, I have to announce that Alfred Sisley: Impressionist Master at the Bruce Museum in Greenwich, Connecticut, will close on Sunday, May 21st. From the flowering fields of spring to the floods of Port-Marly,  Sisley delivers the quintessential appearance of an Impressionist painting in all its freshness, spontaneity and keen observation of nature in flux.  This exhibition has brighten a rather dark winter in these parts - not unlike the period Sisley emerged from during the 1860s. 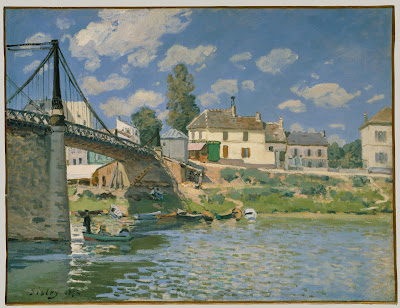 Sadly too, Alfred Sisley's work never cultivated the starstruck fan-base enjoyed by his fellow Impressionists Claude Monet, Pierre-Auguste Renoir, Edgar Degas and Camille Pissarro, with whom he bonded over the study of light on surfaces. Together they organized a "pop-up" at the photographer Nadar's modern studio from April 15 to May 15, 1874, which became known as the first Impressionism exhibition among the following eight. Sisley exhibited in all but the last in 1886. Yes, we know his name from the art exhibitions and auction catalogs, but most people know very little about Sisley's life and personality. Indeed even during his lifetime, he was overshadowed by the more popular members of that renegade group of "sloppy daubers" (the first reaction to the work we now call "Impressionist").  One wonders why this magnificent retrospective is not in a Manhattan museum, where more people would have access to its exceptional quality and the privilege of viewing works owned by private collectors. Alfred Sisley may still suffer from a lack of "power branding." The proof of his true talents is best experienced in front of the work, rather than in reproductions. 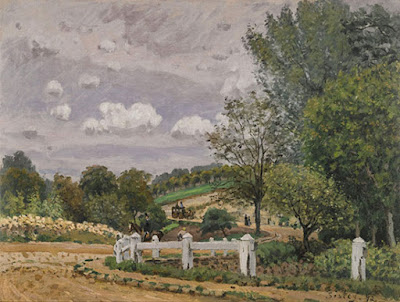 So, what should we know about Alfred Sisley?  A lot. First off, he never became a French citizen.  He was born to two British subjects, William Sisley and his wife Felicia Sell, who had settled in Paris. Alfred was born on October 30, 1839 on rue des Trois Bornes, in the 11th arrondissement - not terribly swanky, but not shabby either. His father made a respectable living as a textile merchant. It was expected that Alfred would follow in his father's footsteps (as most of the young Impressionists' parents hoped for their sons too). Sisley spent 1857-58 in London studying commerce, but also drinking in the great museum collections and developing a passion for Shakespeare. 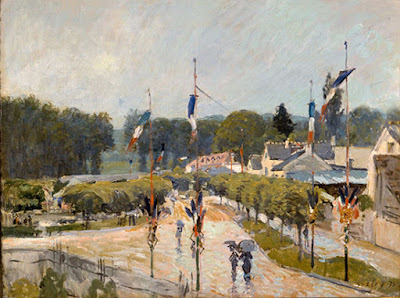 Sisley entered academician Charles Gleyre's studio school during the autumn of 1861, where he met his life-long buddy Pierre-Auguste Renoir, who introduced him to Claude Monet, Camille Pissarro and all the others in due time. They all fell under the spell of Monet's mentor Eugène Boudin and the swashbuckling strokes of Edouard Manet, who never exhibited in the independent exhibitions organized by Monet, Degas and the rest of the Société Anonyme Cooperative des Peintres, Sculpteurs et Graveurs (modeled on the Bakers' Union).

Sisley, like his fellow Impressionists Monet and Pissarro, met his life-long domestic companion in his 20s and remained monogamist (as far as we know). Her name was Marie-Adelaïde-Eugènie Lescourzec. She was a florist. On June 17, 1867, their first child Pierre was born. Their second child, Jeanne-Adèle, was born on January 29, 1869 and their third, Jacques, was born on November 26, 1871, but died three months later on February 28. 1872.

Alfred and Eugènie finally married on August 5, 1897 in Cardiff Town Hall, over thirty years after they met. Eugènie died over one year later, on October 8, 1898, and Alfred Sisley died about four months after that on January 29, 1899 in Moret-sur-Loing. During that last year, on February 3, 1898, Sisley appealed again for French naturalization.  It was never granted. Ergo: this "French" Impressionist was English all his life (as indeed Camille Pissarro wasn't French either, though descended from a French family, he remained a Danish citizen from St. Thomas). 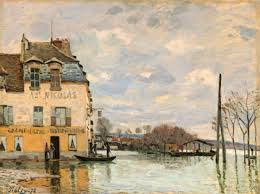 So much for the unconventional details about Sisley's rather conventional life as a plein-air artist among the practitioners of a thoroughly avant-garde modernist approach to making paintings. Resolute in his adherence to this messy, rebellious direction, Sisley suffered from financial hardship most of his life, surviving as best he could from sales and living outside the expensive booming metropolis that Paris had become. Therefore, we see in his work a cozy comfort in rural France, mainly modest villages and expansive landscapes affected by seasonal conditions: spring becomes resplendent in her delicate pastel blossoms, winter feels hushed under its blankets of purple-shadowed snow, fall is a bit broody, and summer dazzles, especially on the surfaces of a river gently flowing under the sun.  A decidedly Sisleyan characteristic is the pathway leading the eye through the composition - a central street dotted with shoppers in the village, a road winding through the countryside, or a path cut into a green meadow on a gently sloping hill. 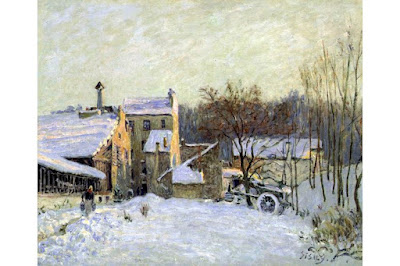 Most of Sisley's work is easel-size, occasionally grander but not by much. This is a snug, huggable show - calming, pleasant and carefully chosen for its diversity of subject matter. Art historian and curator MaryAnne Stevens has astutely arranged in chronological order a substantial introduction to Sisley's range.  She also chose the strongest to represent his areas of interest. Her efforts may never be duplicated, which makes this show so important. Would that the exhibition could stay just a few months longer to serve as an oasis for the mind and eye.  May the audiences visiting the Hôtel de Caumont, Centre d'Art, Aix-en-Provence enjoy this Sisley retrospective as much as we did in the US.

Kudos to MaryAnne Stevens, who wrote valuable essays for the exhibition catalog, along with contributions from Richard Shone and Kathleen Adler.

If you were not able to see Alfred Sisley: Impressionist Master, please join me for a course on Impressionism this summer through Purchase College.  I will teach the course online and at the Met.
Details can be found on the Purchase College website or contact me at beth.gersh-nesic@purchase.edu or bethnewyorkarts@gmail.com.

Best wishes for the weekend,
Beth

Posted by nyarts-exchange at 8:47 AM No comments: 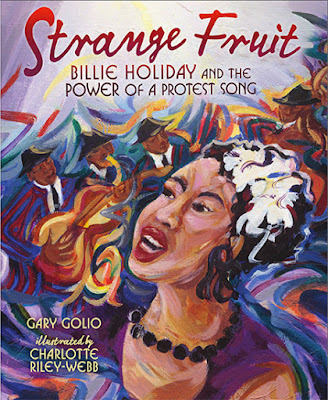 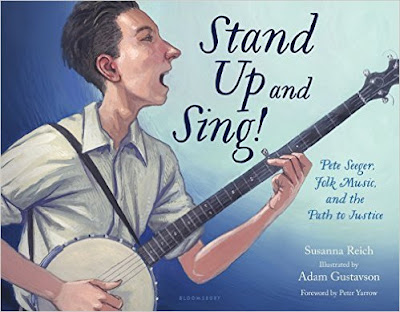 A presentation and book signing of their latest publications:

Award-winning author Susanna Reich’s Stand Up and Sing! Pete Seeger, Folk Music and the Path to Justice (Bloomsbury), with a foreword by legendary singer-songwriter Peter Yarrow

(The following is taken from the press release):
Stand Up and Sing!, illustrated by Adam Gustavson, is the first picture book biography of Pete Seeger, one of the twentieth century’s leading advocates for human rights. Pete dedicated his life to bringing people together through song. Surrounded by music from an early age, he discovered the banjo as a teenager and soon put its rhythms to work. Moved by the suffering he witnessed during the Great Depression, he sang in support of workers’ rights and racial equality. During the McCarthy Era he went from the bestseller list to the blacklist, displaying extraordinary courage in the face of power and injustice.

In Strange Fruit: Billie Holiday and the Power of a Protest Song, illustrated by Charlotte Riley-Webb. Golio tells the story of a young jazz singer who put her life and career on the line by debuting a song for which she'd be insulted, assaulted, and spat upon. "Strange Fruit," written by Bronx schoolteacher Abel Meeropol, was a haunting piece of music about a horrifying subject—lynching. When asked by Barney Josephson—owner of a new nightclub in New York City open to both white and black customers—to sing it, Billie Holiday was at first unsure. But when she witnessed its effect at a Harlem party firsthand, she agreed to perform "Strange Fruit" at Barney's club. From that night on, Billie's life would never be the same.

Susanna Reich is the author of many books for young people, including Fab Four Friends: The Boys Who Became the Beatles, Minette’s Feast: The Delicious Story of Julia Child and Her Cat and José! Born to Dance. Her honors include the Tomás Rivera Award, International Latino Book Award, NCTE Orbis Pictus Honor, ALA Notable and ALA Best Books for Young Adults. The immediate past chair of the Children's Book Committee of PEN America, she lives and sings in Ossining with her husband, children’s book author Gary Golio.

Adam Gustavson has illustrated more than twenty books for children, including Rock and Roll Highway: The Robbie Robertson Story and The Yankee at the Seder, a Sydney Taylor Honor book. Adam holds an MFA from the School of Visual Arts and teaches at the University of the Arts in Philadelphia. He lives in New Jersey with his family and several guitars.
Posted by nyarts-exchange at 6:58 AM No comments: