Rain Room at Inside and Out

It's 8 pm on the last day/night of Random International's Rain Room (2012) at the Museum of Modern Art - and it's raining outside.  I imagine people are now standing in the rain, waiting to enter the Rain Room, which is the experience of standing in the rain without getting wet.  Someone has to point out the irony in all that - it's too delicious to let slip by without a comment.

Announcements were sent out to inform the public that the show would close at 12 midnight to accommodate those die-hearts unperturbed by standing in line for as little as 1 1/2 hour (members) and as much as 8 hours or more.  Once inside the Rain Room, you can stay as long as you like - but only 10 people may stand inside the room at one time.  (One wonders which MoMA wunderkind thought that this was a good idea for a city of millions and its thousands of summertime guests - not.)  As of last weekend, over 70,000 visitors braved the challenging New York heat for fear of missing out on this much-talked about attraction.

If you are like me, however, and can't spare 1 hour - let alone 8 hours - for just about anything these days, take heart.  We still have videos.  Here is one with the artists as your guides:


And at the Barbican Gallery last year:

Or you may share my "rain room" on the porch, gently perfumed with Nature's own refreshing blend.


Our next tour will be Edward Hopper at the Whitney Museum, July 31 at 1 pm.
Please confirm your reservation at nyarts.exchange@verizon.net
Thank you.
Posted by nyarts-exchange at 7:55 PM 1 comment:

Rosalind Solomon: Portraits in the Time of AIDS, 1988, Bruce Silverstein Gallery, through August 2

"Because life leads inevitably to death, these pictures are about all of us."
--- Rosalind Solomon,"Artist's Statement," Portraits in the Time of AIDS, 1988

From May 17 through July 2, 1988, the exhibition Rosalind Solomon: Portraits in the Time of AIDS filled the rooms of New York University's Grey Art Gallery with its large 32 1/2 by 32 1/2 inch square, black and white photographs, attached to a beige fabric wall with ordinary push pins.  The installation seemed uncharacteristically stark and vulnerable for this tony Greenwich Village venue. Each photograph focused on a few anonymous people (the afflicted, their families, their friends and their lovers).  The entire experience of the images (unprotected by the glass of conventional framing) performed a visceral confrontation as well as an intimate encounter for the viewer.

Solomon's portraits also became a visual collaborative essay produced by the sitters and artist as they decided on the settings, poses and circumstances. Sometimes at home, sometimes in a hospital, sometimes in the arms of loved ones, Solomon strove to capture the individual as simply that: a person, whose body turned into battlefield inside and out. The emotions run the gamut, from the appearance of isolation to affectionate embracing, from wistful mediation to active defiance. In each, we are forced to consider a vibrant personality tested by pain, trauma and confronting the inevitability of death.

In 1988, the Grey Art Gallery exhibition intended to break through the vicious stigma, instigated by the media and ignorant hearsay, that had turned people with HIV into social pariah because the public feared contamination. In 2013, hopefully, we are wiser and more compassionate. Today, these portraits memorialize the victims and historicize the moment.

The Grey's director at that time, Thomas Sokolowski, had discovered Solomon's work in the fall of 1987 and asked her to complete the series for a spring opening. The experience for both artist and curator was unusual, but necessary. AIDS (Acquired Immune-Deficiency Syndrome) was on the rise, destroying scores of populations everywhere. The medical community, the arts community and the gay community - among others - felt an enormous urgency to stop this predator and cure those already afflicted with the condition. Rosalind Solomon: Portraits in the Time of AIDS (a title inspired by Gabriel Garcia Marquez's 1985 novel Love in the Time of Cholera, translated into English in 1988) attempted to enjoin this zeal through fostering a personal connection through portraiture.

Solomon wrote in her statement for the current reprisal of the 1988 AIDS show, now at Bruce Silverstein Gallery:

In my practice, I am interested in breaking down stereotypes.  Though I am always aware of the social and political context in which I am working, my pictures raise issues.  They do not give answers.  Wherever I am, I connect on a gut level.  I never gloss over the raw realities of life.  I do not tell people what to believe, but cause them to confront their assumptions.  I take them to the places where I have found connection with strangers and their lives.  My convictions and confusions intermingle as I meet individuals living with emotional and physical stress.  I think that viewers reminded of their own problems, find this disturbing.  They face their own mortality.

Photographing people with AIDS and those in their lives was a wrenching experience.  For a year of my life I met individuals facing the affliction.  My life was all about AIDS.  It was total immersion.  When the show opened, for the most part, it was ignored or got negative reviews.  I was accused of exploitation. Most of the people in the photographs exhibited came to the opening of the exhibit and liked it.  They knew that they were being memorialized.   After that year, I worked on other projects and tried to put the pain that I felt behind me.

Rosalind Solomon remains one of America's most important artists whose primary media is photography. This particular series in her oeuvre features individual portraits (as opposed to genre pieces) and, therefore, is unique among her other endeavors.

In general, Solomon's photographs bear witness to the extraordinary in our times: the strong, the mysterious, the tragic and the beautiful.  Elsewhere  I have written about her photographs of rituals.

I look forward to hosting an evening with Rosalind Solomon on September 10, 2013 at  287 Spring Gallery and Performance Space, beginning at 7 pm.  An exhibition of selected works will open as well, continuing through September 17th.   Please save the date and join us.

Posted by nyarts-exchange at 8:05 AM 2 comments: 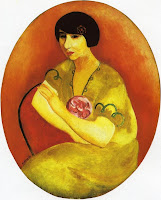 Posted by nyarts-exchange at 9:22 PM No comments: