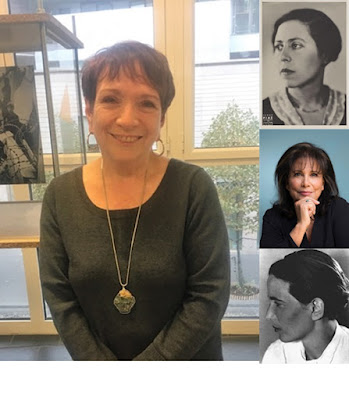 Dear Friends,
It is a thrill and an honor to interview the gifted translator Sandra Smith, whose work you might know from reading the best-seller Suite Française (Knopf, 2006) by Irène Némirovsky. Our conversation in print for the online magazine Bonjour Paris was published last week.  And our conversation in person, focusing on Smith's last three translations will take place on Zoom next Tuesday.  You can register with our host the Federation of Alliances Françaises by clicking this link.
I hope to see you then -
Bien à vous,
Beth

Join us for a conversation with Sandra Smith, award-winning translator of French literature, as she discusses the artistry and challenges involved in translating with Beth S. Gersh-Nešić. Their discussions will focus specifically on three significant works: The Prodigal Child, by Irène Némirovsky, In the Shadows of Paris: The Nazi Concentration Camp That Dimmed the City of Light , by Anne Sinclair and Inseparable, by Simone de Beauvoir.

Sandra Smith has translated twelve of Irène Némirovsky’s novels, including the international sensation Suite Française, into English. She has also translated works by Albert Camus, Guy de Maupassant, and Simone de Beauvoir, among many others and is the recipient of numerous awards including the National Jewish Book Award and the PEN Translation Prize.

Beth Susan Gersh-Nešić, Ph.D. is an art historian and the director of the New York Arts Exchange, an arts education service. Her translation and annotation of André Salmon’s first two books on art were published as André Salmon on French Modern Art (Cambridge University Press, 2005), and her most recent book is a translation of Salmon expert Dr. Jacqueline Gojard’s Pablo Picasso and André Salmon: The Painter, the Poet and the Portraits (Za Mir Press, 2019).  She contributes to the online magazine Bonjour Paris and teaches art history at Mercy College.

Irène Némirovsky was born in Kiev, Ukraine, in 1903 into a wealthy Jewish family and was raised in a life of privilege in Europe. After fleeing Russia during the Revolution, she immersed herself in the company of thinkers, artists, musicians, and other cultural elites as part of the Parisian literati of her time. Sixty-two years after her death, in 2004, the never-before-published Suite Française brought international acclaim to this gifted writer, whose life was tragically lost in the Holocaust. The Prodigal Child can also be found at the following booksellers: Amazon, Barnes & Noble, Books-A-Million, Bookshop.org.

Anne Sinclair was born in New York City and moved to France with her family as a young girl. There she rose to fame, in part due to her family’s vast collection of paintings by Picasso, Braque, Matisse, and Léger, which she would become heir to, but also because her prominence as a highly regarded broadcast journalist led to her serving as the model for statues of Marianne, the national emblem of France, symbolizing liberty. From 1984 to 1997 she hosted 7 sur 7, France’s most popular Sunday evening news show, similar to CBS’s 60 Minutes; during that time, she interviewed many world figures, including Bill Clinton, Mikhail Gorbachev, Shimon Peres, and Prince Charles. She is the author of numerous bestsellers in France. In the Shadows of Paris, which was recently recognized as a top-four finalist for the National Jewish Book Award, can also be found at the following booksellers: Amazon, Barnes & Noble, Books-A-Million, Bookshop.org.

Simone de Beauvoir was a French author and philosopher. She wrote novels, monographs on philosophy, political and social issues, essays, biographies, and an autobiography. She is now best known for her metaphysical novels, including She Came to Stay and The Mandarins, and for her 1949 treatise The Second Sex, a detailed analysis of women’s oppression and a foundational tract of contemporary feminism.

This event will be on Zoom and is free for all Alliance Française members, AATF members, and invited guests of the presenter or publicist. Non-members or persons who have no AF chapter nearby can purchase tickets ($10). Please click here to register.

Posted by nyarts-exchange at 7:45 PM No comments: “Celebrate the Winter Olympics and Welcome the Spring Festival”

It is the Year of the Tiger in 2022. Tiger is known as brave, mighty, auspicious and happy in China;  The Beijing 2022 Winter Olympics is a world sports event, an important platform for world cultural integration, and a great opportunity to "spread the Olympic spirit". May the Olympic spirit of struggling against difficulties and trying hard when faced with challenges be interlinked with the spirit of Chinese tiger culture。

Here is the link: https://mp.weixin.qq.com/s/Mmpdq-7G8NsaEWm4t9QZOA

Here are the artists:

Posted by nyarts-exchange at 7:11 PM No comments: