According to the gallery notes for Gagosian’s current Picasso exhibition, the late great art historian Leo Steinberg claimed that the famous Spanish artist (and infamous Lothario) did not paint a woman “as she presents herself to the world, but how she feels inside.”
Dora Maar, Picasso’s mistress from 1935-1942, told her close friend, the writer James Lord: “All his portraits of me are lies. They’re all Picasso’s, not one is Dora Maar.” (James Lord, Picasso and Dora: A Personal Memoir, 1993, p. 123).
Whom do you want to believe: the male art historian or the artist’s mistress and model? I choose to believe Dora. The evidence is clear in the current exhibition Picasso’s Women: Fernande to Jacqueline, A Tribute to Sir John Richardson, on view in Gagosian’s 980 Madison Avenue gallery, New York, from May 3- June 29, 2019.  Comprised of 36 paintings, drawings and sculptures from mostly private collections, the exhibition came about through a “partnership with members of the Picasso family” to honor the memory of their close friend and colleague, British art historian Sir John Richardson, who passed away on March 12, 2019. Sir John’s magna opus A Life of Picasso, volumes 1-3 (the fourth will be published posthumously), based much of its contents on Picasso’s mistresses’ memoirs and oral accounts, which the gallery notes insist “attests to the central role and influence of many women in Picasso’s life.”
Richardson, Gagosian’s main curator for Picasso exhibitions, probably considered creating an exhibition about several Picasso women at one time or another during his long career (Richard died at 95 years old). Of the six shows he organized, two were dedicated to specific relationships: Marie-Thérèse Walther (begun in 1927 and lasting until the artist’s death in 1973; Marie-Thérèse committed suicide on October 20, 1977, five days before Picasso would have been 96) and Françoise Gilot (1943-53).  Read more on Bonjour Paris
Keep Cool!
Beth
aka Beth S. Gersh-Nesic, Ph.D.
Director, NY Arts Exchange, LLC
@BethNewYork on Twitter
Posted by nyarts-exchange at 10:14 AM No comments: 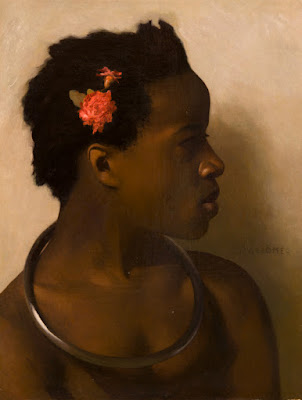 Another French Revolution has taken Paris by storm in, of all places, the elegant Musée d’Orsay, a tourists’ favorite because of its enormous collection of great nineteenth-century masterpieces, from academic to avant-garde, from Thomas Couture’s lascivious Decadence of the Romans (1847) to Boleslas Biegas’s brooding proto-Cubist Sphinx (1902). The best known among “the Moderns” Édouard Manet’s Olympia (1863) shook the foundations of traditional French “received ideas” for art at the Salon of 1865 and continues to challenge our “received ideas” 154 years later, this time through the eyes of an American curator, Dr. Denise Murrell, the Ford Foundation Postdoctoral Research Scholar at the Wallach Art Gallery on Columbia University’s new Manhattanville, situated near the Hudson River side of Harlem. 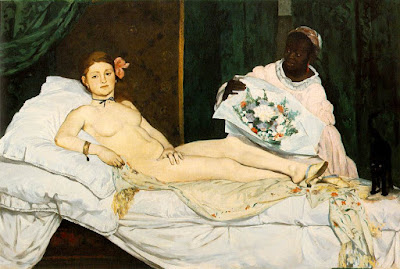 Dr. Murrell’s doctoral dissertation on Manet’s model Laure became the exhibition Posing Modernity: The Black Model from Manet and Matisse to Today on view at the Wallach Art Gallery from October 24, 2018 through February 10, 2019.  Through her beautifully organized selections of art and documentation, she invited “the viewer to reconsider Olympia as a painting that is about two women, one black and one white, who are both essential to achieving a full understanding of this work. . . [because] our understanding of Western modern art cannot be complete without taking into account the vital role of the black female figure, from Laure of Manet to her legacy for successive generations of artists.” Posing Modernity grew from 140 objects to over 300 in the Musée d’Orsay’s Le Modèle Noire de Géricault à Matisse [The Black Model from Géricault to Matisse], including 73 paintings, 81 photographs, 17 sculptures, 60 prints and drawings, 1 photographic installation, and 70 auxiliary documentation (books, magazines, posters, letters, etc.) that populate several galleries.   The New York show started in the mid-19th century and ended with post-modern art.  The Paris show starts in the late 18th century and ends with Glenn Ligon’s Some Black French People/Des Parisiens Noirs (2019), a work especially created for the cavernous great hall in the middle of the Musée d’Orsay.