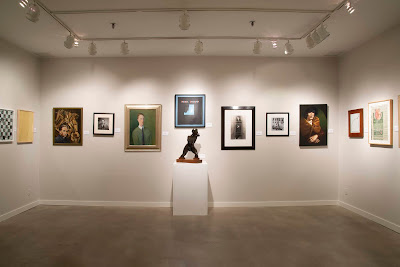 Francis Naumann Fine Art will close its gallery space at the end of the day on Friday, February 28, 2020.  The absence of FNFA will be greatly felt among his fans and the art history community which has relished the exceptional curation of historically important figures in art and their appropriators.  In this spirit, the current exhibition Depicting Marcel Duchamp: Portraits of Marcel Duchamp and/or Rrose Sélavy is pitch perfect for our fond farewell. 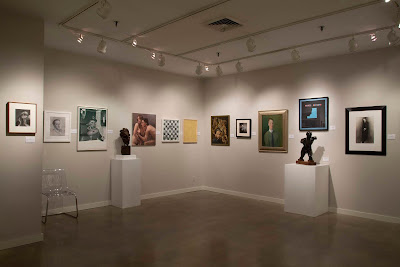 In the gallery's own words:

“Depicting Duchamp: Portraits of Marcel Duchamp and/or Rrose Sélavy opens at Francis M. Naumann Fine Art on January 10, 2020. As the title suggests, the show will consist of portraits of Marcel Duchamp and/or the artist in the guise of his female alter-ego, Rrose Sélavy. Many were made in Duchamp’s lifetime, but countless portraits have been made of the artist in the years since his death.  Indeed, a number were made by contemporary artists specially for inclusion in this show. 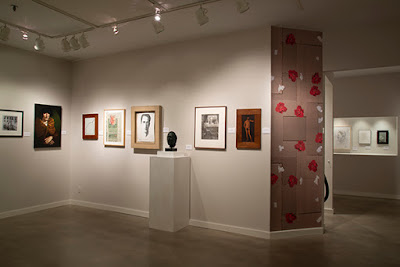 Marcel Duchamp’s reputation as an artistic iconoclast—combined with his legendary good
looks, genial character and accessibility—have made him the subject of countless portraits.
Indeed, if we combine the number of portraits made by his contemporaries with those made posthumously, Duchamp has been depicted more often than any other major artist of the modern era. Works of art are generally comprehended only visually (“retinal” in Duchamp’s terminology), and are, therefore, subject to evolving changes in taste.  The ideas Duchamp introduced avoid fluctuations of style by inhabiting the mind, thereby forcing an intense and rigorous engagement with the process of thought. As a result, artists render him as a physical presence, for to this day, his ideas continue to affect the way we think about art and the art-making process. 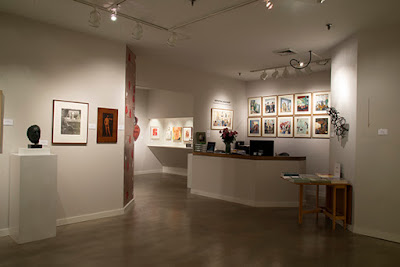 
The first formal painted portrait of Marcel Duchamp was made in 1915 by Walter Pach (1883-1959), an artist best remembered today for having helped to organize the Armory Show of 1913. It was Pach who had selected many of the modernist works in that landmark exhibition, including Duchamp’s infamous Nude Descending a Staircase. Consequently, he had done more to establish the artist’s reputation in the United States than any other single individual. In the painting, the artist wears a green shirt with a white collar and blue tie, and he is set against a modulated green backdrop that closely matches the color and texture of his shirt (green was Duchamp’s favorite color). Pach not only captured his sitter’s penetrating intelligence, but the delicate and attenuated features suggest an effeminate quality that the artist himself probably would not have denied, for with his invention of a female alter ego some years later, he would openly explore this aspect of his complex but ever-engaging personality. 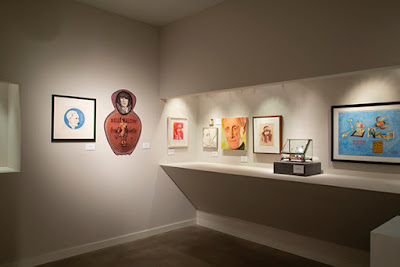 The Pach portrait is the earliest dated work in the show, but it was followed by countless others made in the artist’s lifetime. Many photographs of Duchamp were taken over the years; see those by Denise Bellon (1938), Irving Penn (1948), Naomi Savage (1949), Victor Obsatz (1953), and Arnold Rosenberg (1958).  He was depicted countless times by various painters, sculptors and printmakers, beginning with an early torso by his brother Raymond Duchamp-Villon (1910), plaster and bronze life casts by Ettore Salvatore (ca. 1945), sculptures by Reuben Nakian (1943), Isabelle Waldberg (1958), as well as to prints made by Man Ray (1971), Marcel Gromaire (1952), an etching by his sister Suzanne Duchamp (1953) and another by his eldest brother Jacques Villon (1956). 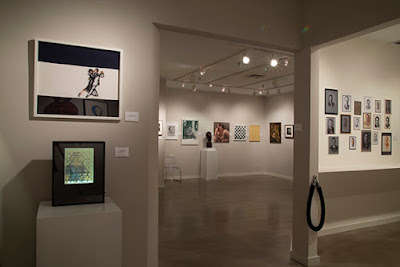 
By and far the most ambitious series to depict the life of Marcel Duchamp was undertaken by the Musée National d’Art Moderne, Centre Georges Pompidou in Paris when they opened their inaugural exhibition in 1977—eleven years after the artist’s death—with a Duchamp retrospective.  To introduce this exhibition, they displayed a series of pictures illustrating the life of Marcel Duchamp painted by André Raffray (1925-2010), an artist who had earlier worked as an illustrator for the French cinema. Over a period of two years, he completed La Vie illustrée, twelve gouache panels that reconstruct major events in Duchamp’s life not otherwise recorded: from painting his first picture at age fifteen, to standing next to his Etant donnés in the last year of his life. 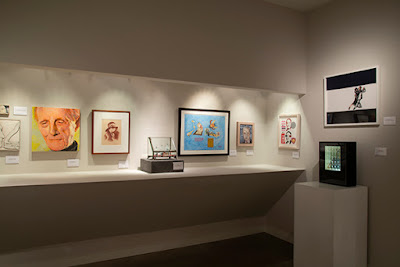 Curiously, the twelve panels in the series do not account for the eight years that Duchamp spent in New York from 1915 through 1923, arguably the most important and productive period of his life. The omission (likely a consequence of the Francophile nature of the enterprise), was rectified when Raffray was later commissioned by Francis M. Naumann to add a thirteenth panel to the series called Chez Arensberg (1984), depicting a typical soirée at the apartment of Louise and Walter Arensberg, Duchamp’s steadfast patrons during his years in New York. 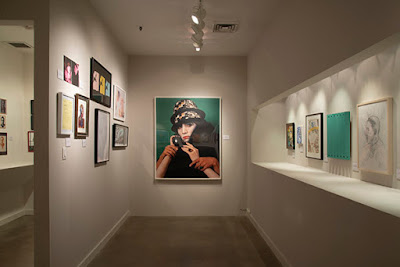 
So, run, flight or "beam up" to this landmark show.

Thank you, Francis Naumann and Dana Martin, for 18 1/2 years of extraordinary exhibitions.
We will miss your presence at 24 West 57th Street.

Posted by nyarts-exchange at 10:01 AM No comments:

Tea with Ruby! Paint with famous artist Ruby Silvious is coming to Manhattan for one night

Ruby Silvious's exhibition Recycled and Refashioned is now on view at the Albany Institute for History and Art, through July 7th.

Here is a rare opportunity to learn how to paint on tea bags and eggshells with Ruby in Manhattan: 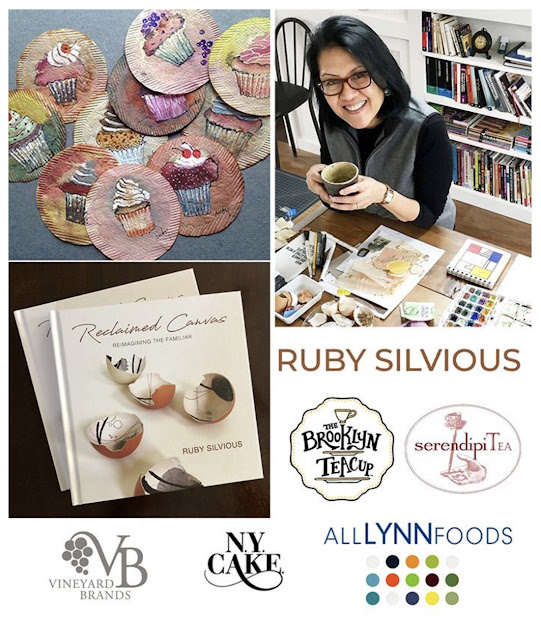 What's on the menu?

Gather with Alliance members at N.Y.Cake to make your own artwork with recycle artist Ruby Silvious, on unusual canvases (did someone say teabags and eggshells?).

The event will start with a demo by Ruby, followed by participants learning how to paint on used tea bags and the inside of cracked egg shells.

Ruby will also be signing her new  coffee table book, Reclaimed Canvas: Reimagining the Familiar,  which members and guests can buy at the discounted price of $25 (Reg. $35)

And yes, there will be a raffle! Lucky attendees will go home with Ruby’s first book, 363 Days of Tea: A Visual Journal on Used Tea Bags; a framed original artwork from Ruby; or a gift certificate from NY Cake.

Ruby Silvious  is a recycle artist who is internationally recognized for her miniature paintings and collages on the used tea bag. She is the author of 363 Days of Tea: A Visual Journal on Used Teabags, and the newly released Reclaimed Canvas: Reimagining the Familiar. In her new book, Ruby wants viewers to keep an open mind and think beyond the boundaries of what they may
consider traditional art.

Lisa Mansour is an Alliance member and award-winning, third-generation expert in cake decoration and the co- founder and the co-owner of NY Cake, the premier destination for baking and decorating supplies in New York City. Mansour is also the head of NY CAKE Academy, a hands-on cake decorating school, where she teaches classes on fondant, specialty cakes and seasonal topics for baking enthusiasts of all ages and skill levels.

Lynn Bernstein is an Alliance member, New York City chef, and a graduate of French Culinary Institute/ICC.  allLYNNfoods is her high-end boutique catering company serving NYC.  With her background as a fashion stylist and education as a graphic designer, Lynn  brings her sensibilities to your palate and to your party.

Posted by nyarts-exchange at 8:02 AM No comments: