"Sins" of the Summer Continue through the Fall 2015 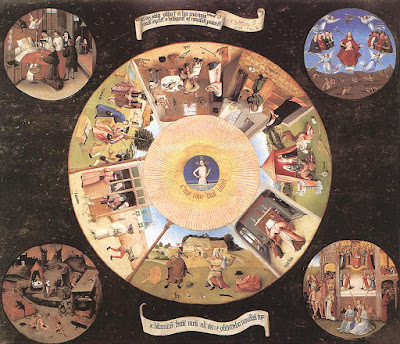 The Fairfield/Westchester Museum Alliance (FWMA) organized a sinned-filled summer and fall with its first united effort: the "Seven Deadly Sins."  Based on the "Eight Evil Thoughts" set down by Evagrius Ponticus, a Greek monk (345- 399 AD), and established by Pope Gregory I in 590 A.D., these moralizing concepts may seem a bit out-of-touch with our relativist 21st-century minds. Moreover, most of the curators missed the opportunity to teach us about the use of morality tales in art history. For traditionally, art was meant to uplift and ennoble, inspire virtuous behavior and give comfort to those afflicted by pain.  Art also promoted fame through portraiture - an act of pride, of course.  Pride, therefore, can do good - recording the faces of yore, 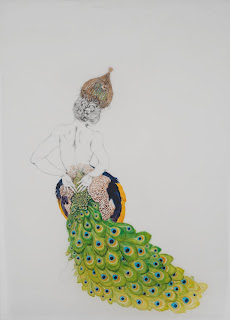 Deputy director and curator at the Bruce Museum Susan Ball should take great pride in her wonderful selection of artworks and her ability to educate her audience. Of special note, the exhibition includes a mesmerizing Antoine Roegiers video of animated Bosch and Bruegel characters which act out all Seven Deadly Sins in brief humorous vignettes. According Dr. Ball: "The Seven Deadly Sins have played a significant role in theology, literature and art since the Middle Ages, Pride, or superbia, represents the mother of all sins and the one from which all others arise – the root of a many-branched tree.  .  . The debate about the definition of sinfulness in general and each specific transgression in particular has raged for centuries.  One might ask, at what point is the line between healthy self-esteem, or pride, and the sin of arrogant self-aggrandizement, or pridefulness, crossed?”

So true!  I should note that there were attempts to conscious-raise in other exhibitions. 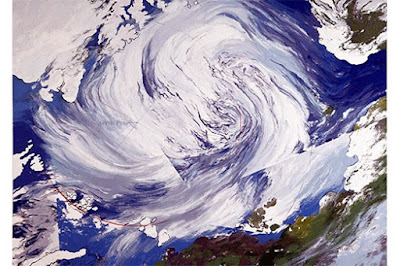 For example, "Wrath: Force of Nature" at Wave Hill, took on environmental issues with magnificent paintings that address the unpredictability of Mother Nature. Some were tumultuous, others calm. Together, the works delivered such visual pleasure their negative connotations seemed beside the point. (Please click on the title of the exhibition to see digital reproductions of the paintings and read the catalog.) 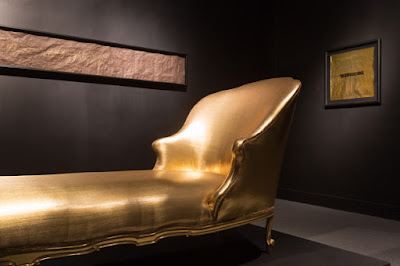 Greed at Neuberger Museum, Purchase College, exhibited Gold organized by the Curator of Exhibitions José Carlos Diaz at the Bass Museum. The press release stated: "Some artists explore the ritualistic use of gold to imbue objects with spiritual and eternal significance. James Lee Byars utilizes gold in pursuit of his idea of sacred beauty and perfection by including a tiny golden sphere in his Self-Portrait and using metallic fabric in The Golden Divan for one of gold."

What does this have to do with "Greed"???  Plenty of eye-candy, but "Seven Deadly Sin"-ful it is not.(Please click on the exhibition title to view several examples in the show.) 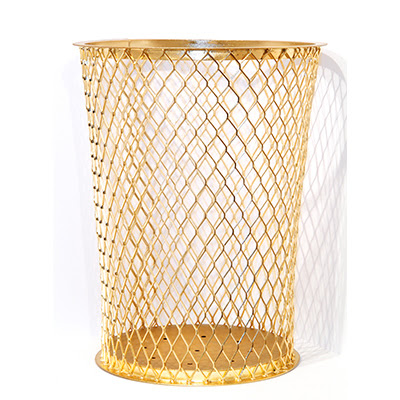 Sylvie Fleury at least has a sense of humor. The absurdity of this gold-plated garbage receptacle evokes a preciousness that teeters between excess and emptiness. "All that glisters is not gold," Shakespeare reminded us, i.e., a gilded veneer may lend value to worthless objects, such as Dario Escobar's 1999 Untitled (a golden McDonald's soda cup) or disguise potential dangers, as in Chris Burden's Gold Bullets (2003). 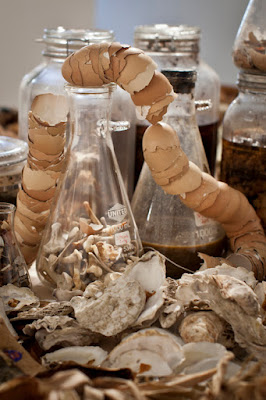 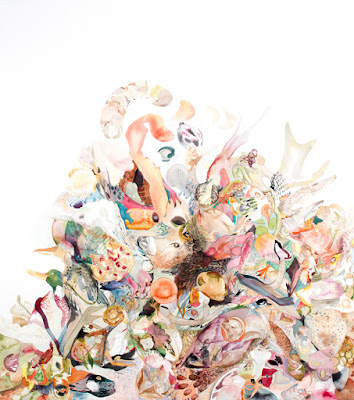 Emilie Clark, "Untitled EHR/H-1," from The Delicacy of Decomposition series, 2015

Gluttony at Katonah Museum of Art, serves up the sin of garbage-making by aesthetically displaying various food scraps accumulated over a year.  The artist Emilie Clark views her studio as a lab and combines art with science to help us understand her installation Sweet Corruptions, 2012-13. Her  series of delicate watercolors of decomposing edibles (2015) surround a large wooden table groaning with egg shells, bread crusts, fruit peels and cheese rinds, arranged in an attractive composition.

However, one person's idea of  gourmet may be another person's idea of gourmand.  Do we really need 20 ounce servings of soda?  Apparently, Mike Bloomberg said "nay" and his NYC constituents said "forgettaboutit."  Gluttony is in the eyes of the beholder.  And waste, well that's another topic entirely - and suitable for a different show. 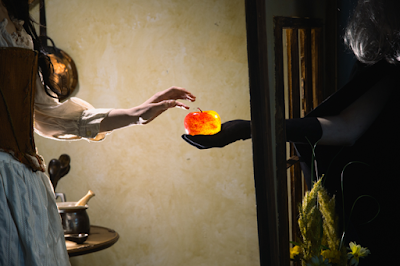 Envy:One Sin, Seven Stories, combines digital photographs of actors and 3-D stage sets in order to dramatize classic fairy tales about coveting desirable possessions, from beauty to material goods. Unfortunately, the choice of Snow White set my nerves on edge, as I am a stepmother and believe that today's stepmothers need kinder publicity.  Why not consider the envy of siblings: Cain and Abel, Jacob and Esau, Osiris and Seth, Mufasa and Scar?   Why not an updated examination of Envy in today's media: Cribs, Housewives of Whatever, or The Primates of Park Avenue? 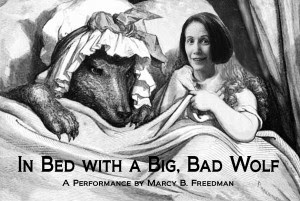 Lust at Hudson Valley Center for Contemporary Art proved to be the least appealing of the exhibitions and most inappropriate for its location: the only museum in a family town (Peekskill) should not bar youngsters under 18 years old from art. This decision may be the real sin perpetrated by this lifeless show. Nevertheless, In Bed with a Big, Bad Wolf, performed by Marcy Freedman on July 26, brought intelligence with a twist of humor to this fairly dull take on such a spicy topic. 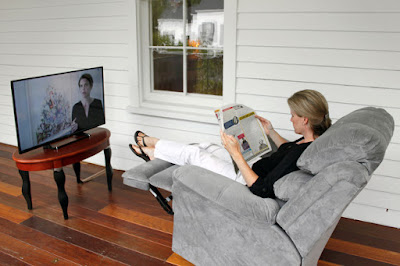 Sloth at the Aldrich Contemporary Art Center had the most innovative idea: engage the audience through direct participation.  Here, the visitor can sit in a comfy recliner and watch a video loop of curators explaining the other exhibitions in the FWMA SDS project.  However, right here and right now, as you read, you can out sloth the Aldrich's Sloth-y installation.  For the New York Arts Exchange provides the various links to the FWMA venues so that you can sit in your own easy chair in the comfort of your own home accompanied by gluttonous portions of your own favorite snacks tailored to your own greedy appetite. (After all, this the 21st century and you should be able to curate your own experience of the Seven Deadly Sins in your own way.)

Two exhibitions have closed already.  Five still remain on view, but not for long.  May I suggest that you put Pride at the top of your to-do list - and take pride in the fact that you didn't miss this excellent show.

If you were to organize an exhibitions on Seven Deadly Sins in our time, which would you choose? Perhaps, an updated list might consider the Seven "Sins" that lead to death, such as murder, neglect, abuse, hazing, drug addiction, "doping" in sports, and excessive measures for beauty.

Please write to me at nyarts@verizon.net or comment on my FB page.  I would love to hear your thoughts on "sinfulness" in the 21st century.

Best wishes to you all - whether you are atoning for your sins on Yom Kippur or indulging in the pleasures of mid-September or both,

Posted by nyarts-exchange at 12:32 PM No comments: 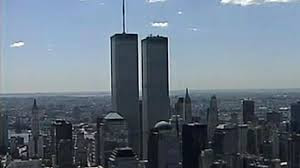 And to Michael Richards - whose light still shines upon us through his art: 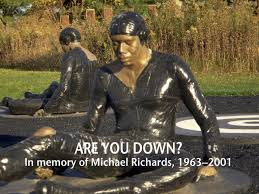 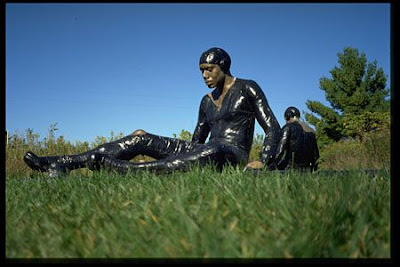 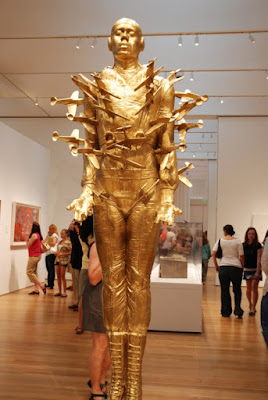 Posted by nyarts-exchange at 6:08 AM No comments: 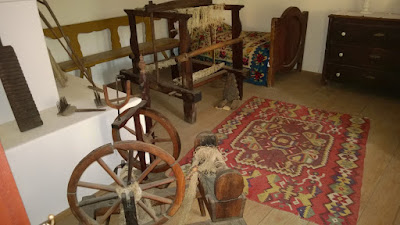 Happy end of summer and best wishes for the Labor Day Weekend.   I hope you all had wonderful experiences and enjoyed every minute of summer pleasures.

Please send me your list of art adventures.  Did you see "China" and Sargent at the Met?  Van Gogh and Whistler’s Mother at the Clark?
Hans Hofmann and "Pride" at the Bruce Museum?  "Alice" at the Morgan?
Did you see "Storylines" and Doris Salcedo at the Gugg?  Lots of old friends there (including a few from the New Museum Triennial we saw last May).  The Salcedo show is among my favorites this summer.

There is still time to catch them all.

This semester I won’t be able to give tours.  I agreed to give 3 courses at Purchase:

You are welcome to register for the credit class with Friends of Humanities – only $65 per course: https://www.purchase.edu/Departments/AcademicPrograms/LAS/Humanities/friendsofhumanities.aspx - if you are 60 years young or 60+.

If you would like to join the Museum Studies course, please let me know. This is a non-credit course and may not accept the Friends of Humanities privileges. Nevertheless, it's a great way concentrate on museum culture and have your say during our lively conversations.

Also – I started two blogs (in addition to this NY Arts Exchange blog):
"Summer in Serbia" http://summerinserbia.blogspot.com/    where I will add my pictures taken this summer, one batch at a time.

And Postmodern Mom: http://postmodernmother.blogspot.com/    where I post personal essays that have been rolling around in my brain for a while (inspired by the "Envy" exhibition at the Hudson River Museum).

I am sharing these blogs on Facebook, so if you are not on FB (or have not friended me on FB) and would like to receive these posts separately, please sign up to follow the blogs.  Many thanks!

I also started the Museum of Kindness on Facebook and have a blog for that too.
Please, please send me information that might contribute to this virtual museum. I would greatly appreciate it.

Please stay in touch – WRITE, CALL, TEXT!   I would love to hear from you.
And, please feel free to drop in to my classes.