Ruby Silvious: 363 Days of Tea at Riverrun Books and Manuscripts, December 2 - 4, only! 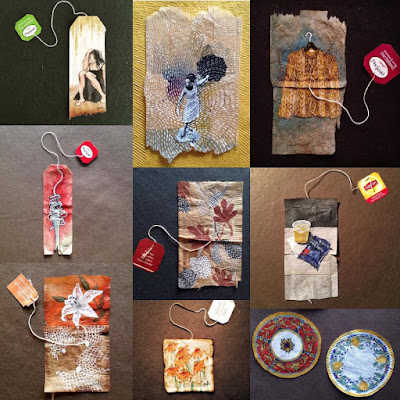 The New York Arts Exchange is pleased to announce its partnership with RIVERRUN Books and Manuscripts for the forthcoming exhibition of Ruby Silvious: 363 Days of Tea, a magnificent collection of paintings on tea bag paper, executed ritually from January 3 – December 31, 2015.  The subjects range from whimsical to poignant, depending on the artist’s mood and current events.  This brief “pop-up” exhibition will feature about 20 of her original paintings and her beautifully illustrated book, 363 Days of Tea, which includes all the paintings in a sumptuous 8” x 8” volume.  Please join us for three days of exciting events:
·         Friday, December 2 – opening, 6 – 8 pm
·         Saturday, December 3 – artist’s talk and book signing, 3 – 5 pm
·         Sunday, December 4 – owner of RIVERRUN Books, Tom Lecky (former head of Books and Manuscripts at Christie’s) presents “How to Think Like a Collector,” 2 – 4 pm.

RUBY SILVIOUS is a visual artist and graphic designer. Her recent work includes experimenting on recycled and found materials. On January 3, 2015, she started a project called 363 Days of Tea, a visual daily record of her impression of the moment, using the emptied-out tea bag as her canvas, and altering it to create a new work of art every day for 363 days. She draws, paints, prints and collages moody, evocative and sometimes whimsical art on used teabag paper. She is the author of a newly published coffee table book, 363 Days of Tea: A Visual Journal on Used Teabags. Silvious was educated in the U.S., Europe and Asia; she currently lives in New York's Hudson Valley. Her art is exhibited internationally, and is featured in public and private collections. www.rubysilvious.com
RIVERRUN specializes in rare, antiquarian, and unusual books & literary manuscripts of all periods, with an emphasis on literature, travel & exploration, art reference, illustrated books, science & technology, and Americana. We seek interesting and important material in all fields.
RIVERRUN's cataloged inventory exceeds 15,000 titles, all of which may be found online. The shop's revolving inventory of some 30,000 volumes means that there is always more to discover if you pay us a visit.  Please call or e-mail to confirm hours and availability info@riverrunbookshop.com or (914) 478-1339. http://www.riverrunbookshop.com/
NEW YORK ARTS EXCHANGE is an arts education service that offers lectures, private art tours, studio visits and curatorial services. Founded in 2003, NYAE is dedicated to connecting audiences with all the arts in accessible and joyful ways in order to inspire life-long curiosity about what the arts can offer.  We wish to thank Tom Lecky of RIVERRUN Books and Manuscripts for helping the NYAE bring Ruby Silvious’ extraordinary work to Westchester County.

Posted by nyarts-exchange at 6:15 AM No comments: 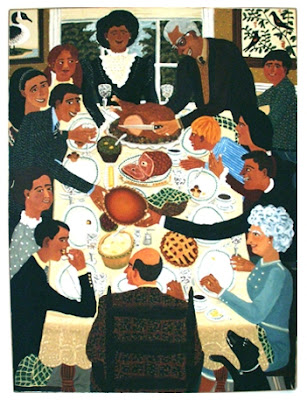 Greetings for Thanksgiving with the greatest gratitude of all for you, who are reading this blog and have been so wonderful all these years as the New York Arts Exchange celebrates its 13th birthday. This year we shifted away from weekly art tours to offering more lectures and exhibitions in NY and CT venues. Please join us as we learn more about art together.

The New York Arts Exchange is about conversation - we want to share our love of art and artists with you.  Please send suggestions on how we might do this better.  Which approach to art suits your tastes and lifestyle best? Write to me at nyarts.exchange@verizon.net  Or leave a comment at the end of this blog post. 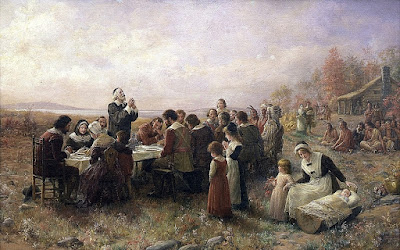 The blog post today highlights three different versions of the holiday feast: anecdotally, historically and nostalgically.  Which one do you like best? Notice that Norman Rockwell's iconic Freedom from Want, 1943, is not among these paintings.  I know David Bate's work, but Jennie Augusta Brownscombe and Doris Lee are artists I had never heard of before I decided to do some research for this blog.  I am grateful to learn about their lives and their work from the bounty that the internet gives us everyday.  Thank you, Google, for the convenience of quick and informative searches. 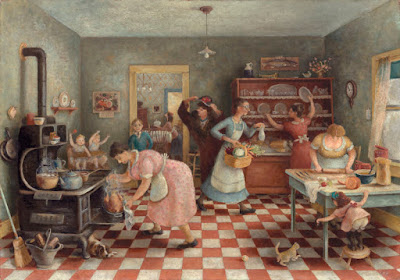 As you turn your thoughts to holiday shopping, please consider purchasing Ruby Silvious' lavious book 363 Days of Tea.  Her paintings will be on display for only 3 days at Riverrun Books and Manuscripts, 12 Washington Avenue, Hastings-on-Hudson,  Come savor Ruby Silvious' beautifully rendered paintings on delicate teabag paper.  Each is a marvel to behold.  All these stunning paintings are reproduced in Ruby Silvious: 363 Days of Tea.  Ruby will sign her books on Friday, December 2nd (reception 6- 8 pm - during the Hastings Night Crawl) and Saturday, December 3rd (along with her artist's talk, 3 - 5 pm).

On Sunday, December 4th - Tom Lecky, the owner of Riverrun Books and former Head of Books at Christie's, will share his secrets on "How to Think Like a Collector" - pearls of wisdom from a pro.

Posted by nyarts-exchange at 7:47 AM No comments: 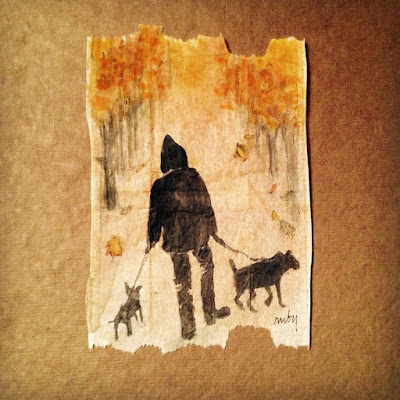 You are cordially invited to:

Saturday, December 3, from 3 to 5 pm: Artist's Talk and Booksigning

Sunday, December 4, from 2 - 4 pm: "How to Think Like a Collector"
advice from Tom Lecky,
former Head of Books at Christie's, now owner of Riverrun Books

Tea and cookies served
Come join us for one or all three events!

Posted by nyarts-exchange at 9:04 PM No comments: 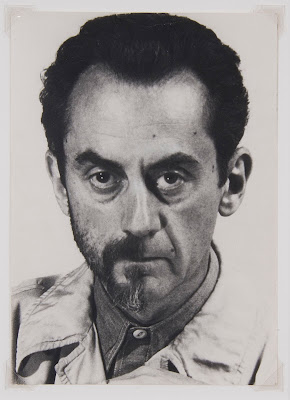 Francis Naumann is a national treasure and one of the smartest art historians I can think of - particularly when it comes to Dada artists.  So any Man Ray exhibition deserves our attention, for it is indeed a reason to celebrate as we head into the holidays. Alas, today and tomorrow mark the end of Man Ray: Continued and Noticed - a most excellent show that should be noticed by everyone.

Naumann explained that he has mounted an homage to Man Ray's 1948 show at Copley Gallery in Beverly Hills entitled Man Ray: Continued and Unnoticed.  "Man Ray must have wanted these words to let his audience know that he was still working ('continued'), but that he worked with virtually no recognition ('unnoticed').  The present exhibition - held 68 years after his show at the Copley Galleries - is intended to demonstrate that Man Ray's work not only continues to be of interest, but that it is still noticed and, with the passage of time, better understood and appreciated (although the latter may never have been his intent)."

May I add that the same goes for Francis Naumann's endeavors.  They continue to enlighten us and are always noticed for their insightful analyses. 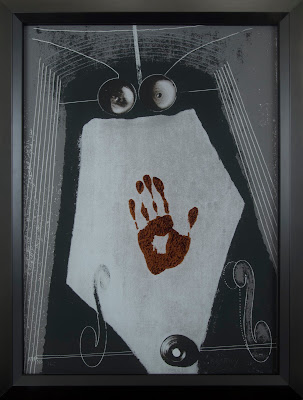 In Man Ray's self-portrait on plexiglas, we see evidence of the artist's grasp of French as he attempts to visually pun his name with his handprint (main - pronounced "meh") and beams of lights or stripes (rayons or rayures).  This images also demonstrates Man Ray's fertile mind for invention. Naumann attributes this "defiance of artistic convention" and "commitment to absolute freedom in the arts"  to "his association with the anarchist movement in New York."  Moreover, this portrait speaks to the artist's infusion of humor in his work, which Naumann points out several times in his essay, particularly at the end in Marcel Duchamp's definition, 1959: "Man Ray, n.m. la joie, jouer, jouir  [Man Ray, noun, masculine, joy, to play, to enjoy]."

And for those of you who cultivate a love of Man Ray's work, this exhibition will not disappoint. One of his best known works (among so many) entitled Observatoire Time: The Lovers is on view.  Based on Lee Miller's lips, which he kissed so often and missed intensely after their breakup, it wistfully conjures up this photographer in her own right, who was Man Ray's assistant and lover from 1919 to 1932.

Would love to add more to this blog post, but the "heure" is late and I must post asap.

The exhibition will be featured in the Francis Naumann booth at Art Miami Basel, December 1st through 4th.   Please inquire at the gallery for details.

N. B. - I highly recommend the catalog for this show, even if you are not able to see the works in person - a must-read for any serious art historian and all Man Ray fans.

In Honor of Veteran's Day: "Cubism and War" at Museu Picasso in Barcelona 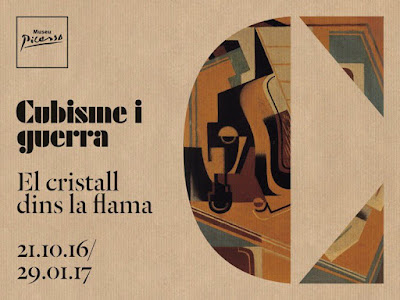 In honor of Veteran's Day, we remember those who fought in all wars, especially World War I - 100 years ago today.

Here is a poster for Cubism and War: The Crystal in the Flame at the Museu Picasso in Barcelona, from October 21, 2016 through January 29, 2017.

May peace prevail and goodness triumph -

Posted by nyarts-exchange at 9:41 AM No comments: