Last Call: Seismic Shifts and The Annual: 2013 at the National Academy Museum, through May 5

Here is a link to the film's trailer on YouTube.

Still going strong, 86-year-old Betye Saar contributed her recent works to Seismic Shifts, installed at the very beginning of the exhibition to emphasize the rich multi-media aspect of this curatorial endeavor.  Saar is known for her vast collection of found or received objects that she embeds into exceptionally imaginative environments.  Her Flight of the Trickster (2012) was created especially for the National Academy's show.  (Composed of layered black handmade paper and other materials, it does not reproduce well as a digital form.)  Here I have included Red Ascension from her RED TIME show which references the bloody journey of Africans to the New World - from slave ships to shackles to emancipation (following the stars to freedom with the underground railroad).

For a preview of Seismic Shifts conducted by curator Marshall Price, click on the embedded video posted below.

The New York Arts Exchange will tour the exhibitions on Wednesday, May 1, meeting in the lobby at 1 pm.  To confirm or make reservations, please contact me at nyarts.exchange@verizon.net

Posted by nyarts-exchange at 10:23 AM No comments: 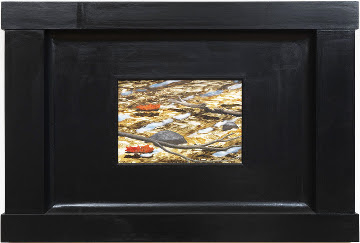 Neil Jenney is known for his "bad paintings" of the 1960s and his "good painting" of the 1970s, which were brought together in 1978 at the New Museum in its original space at the New School for Social Research,  Fifth Avenue and 12th Street. The edginess of those early days of the NM may serve as an introduction to the quiet subversiveness of NJ's persona.   He is not your usual Gagosian diva.  Even the decision to curate a show of his own works on one floor and his influences on another, speaks of Jenney's proclivity to counter mainstream trends.  Why not direct the viewer's mind toward considering his influences? And what an assortment: Sally Ross, Truman Egleston, John Duff , Louise Lawler, William Wegman, Thornton Willis and Robert Lobe, among others. 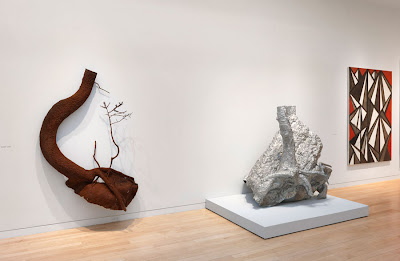 For more about Jenney's background and career,  visit Gagosian website and read the review in The New York Times

The New York Arts Exchange will tour this show and Aquavella Gallery's The Pop Object (through May 24), on Wednesday, April 24 at 1 pm.   Reservations are still being accepted at nyarts.exchange@verizon.net.  $60 per tour. 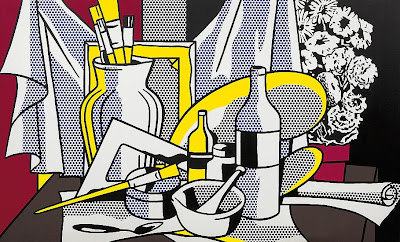 
Posted by nyarts-exchange at 12:25 PM No comments:

Gerry Davis thinks about point of view: yours, hers and the characters' in her paintings.   In her Sacrifice of Abraham (an interpretation of the Sacrifice of Isaac in the Bible), a colossal biblical father towers over our body, wielding a shiny knife that reflects two youthful blue eyes.  The composition cubistically pictures Abraham positioning himself twice.  He too has his doubts about this ultimate act of faith (Kierkegaard's Fear and Trembling).  The terrified expression in the eyes, Isaac's and ours, registers disbelief too.  Is this how it feels to lose trust in an authority figure?   Davis insists on Isaac's point of view, forcing us to imagine the victim's perspective, in the Bible and in real life.

Equally disquieting is Davis' version of the Annunciation, when divine intervention once more strikes terror into the heart of mortal beings.  Again, we witness an ignorant youth caught up in God's plan.  In this case, we are the Archangel Gabriel hovering above as the shadows of our wings fall around the body of the Virgin who lies in bed, transfixed in her state of anxiety.  Awash in eerie colors and weird reflections, Davis' point of view focuses on the vulnerability of a teenage girl, who seems genuinely scared and mystified.  Should she believe this Apparition?

Both Isaac in the Sacrifice of Abraham and Mary in Annunciation seem to have "problems with authority," the title of a book that features Davis' work and an interview with writer Lawrence Weschler.   It's a great source for delving further into a creative mind that perceives darkness where most of us only see the light.

New York Arts Exchange offers a tour of Chelsea galleries on Wednesday, April 10th.  We will meet at IPCNY, 208 West 26th Street, 5th floor, at 1 pm.  Fee: $60 per tour.
Our Spring Tour schedule is listed on our home page: www.nyarts-exchange.com