Did you take a second language in school but never had much use for it? Even if you know a minimum of another language, you can enrich your own writing and publishing credits through literary translation. Learn about the many opportunities in the growing field of global literature. We share it all: the Good, the Bad, and the Transcendent.   Come join us! 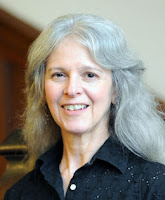 Posted by nyarts-exchange at 11:15 AM No comments: 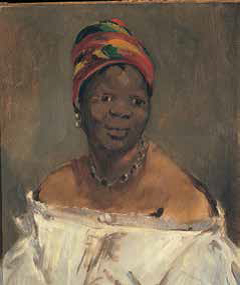 Posing Modernity: The Black Model from Manet and Matisse to Today, on view in the Wallach Art Gallery on Columbia University's new Manhattanville Campus, explores a topic in art history that has been sorely neglected. Despite scores of scholarly writing on works of art that feature black models as maids, nannies, and slaves, art historians have often failed to describe the iconography of the women of color in these scenes.  Posing Modernity corrects this implicit racism and then goes further to explain the meaning of black women in art from mid 19th century through 21st century art.  Over 100 objects loaned from 40 international collections by white and black artists depict the image of black women in paintings, sculpture, drawings, photography, and film. The curator Denise Murrell, Ph.D. centers her thesis on the concept that the black model became a marker of modernity during the emergence of modern art in the 19th century and 20th century, particularly in the work of Edouard Manet and Henri Matisse. To underscore this analysis, the curator included contemporary works that appropriate Edouard Manet's Olympia (1863) and other contemporaneous images of 19th century black models.

In Manet's masterpiece, we see the model Laure, posing as the courtesan's maid. The Portrait of Laure, rarely seen outside of its Italian collection, demonstrates the notion of "modernity" described by this exhibition. Here the image of a woman of color comes alive through Manet's new technique of quick strokes and reduced contours. Her multicolor turban exoticizes her identity, while her clothes describe a Parisian in contemporary society. She is part of the modern city that brings people from different countries together in cosmopolitan centers thanks to the industrial revolution. For more information about the model Laure, please read my article for Bonjour Paris.  There is also copious scholarly material in the sumptuous exhibition catalog for the Wallach Art Gallery exhibition. 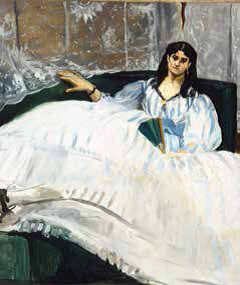 We also learn about black women who belonged to higher ranks of society though birth or celebrity.  The Haitian actress Jeanne Duval, known as the inspiration for many of Charles Baudelaire's poems, was a Creole mixture of French and black ancestry. Her stormy relationship with the poet lasted on and off for 20 years. In this portrait by Baudelaire's close friend Manet, we may see the signs of degeneration from syphilis, which caused Baudelaire's death in 1867. Some sources claim she died as early as 1862 (the year of this portrait) or as late as 1870.  The strange dark marks that represent her eyes may refer to her blindness at the end of her life. 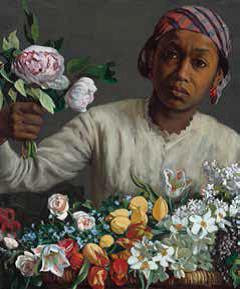 Frédéric Bazille's Young Woman with Peonies (1870) captures the greeting of a flower vendor.  She holds her peony out to us in order to engage our attention. Bazille died during the Franco-Prussian War later this year.  His work reminds us of the early days of Impressionism, before their first major exhibition in 1874, with its lush vivid colors redolent with sunshine from his native Montpellier.  Here a young woman who seems to come from the Caribbean, suggests the changing landscape of modern commerce, as people from all walks of life came to France in order to make a new life through self-made entrepreneurship.  Again, the model wears modern French dress and an exoticizing scarf on her head. 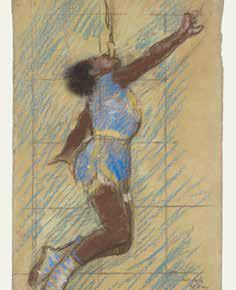 Miss Lala was Anna Olga Albertine Brown, born in Stettin, Prussia (in today's Poland), on April 28, 1858.  Therefore in Degas's painting Miss La La at the Fernando Circus (1879), she was only 21.  An acrobat, trapeze artist and "female cannon," Miss La La acquired an international reputation for her astounding feats, most notably hanging from high above the audience dangling from a rope she held in her teeth.  Miss La La was also known as Anna Kaire or Ogla Kaire. She married the American contortionist Emmanuel Woodson in 1888.  The couple had 3 daughters and developed the act The Three Keziahs. The last record from her life is an application for a US passport in 1919. 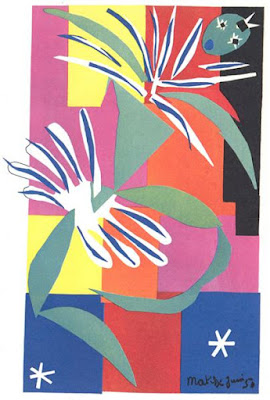 From the galleries that feature 19th century paintings, sculpture and photography, we move on to numerous paintings and drawings by Henri Matisse, crowned by a superb collage entitled Creole Dancer (1950), which may refer to African-American modern dancer Katherine Dunham. 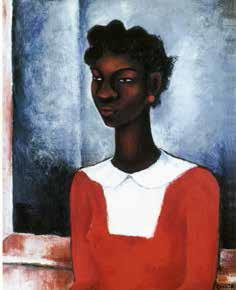 In the same galleries with Matisse, we find the 20th-century American black models interpreted by modernist African-American artists. Two contemporaries, William H Johnson (1901-1970) and Charles Alston (1907-1977) were born in North Carolina and moved to New York in their youth during the Great Migration.  They both became part of the art scene in New York but in different African-American contexts.  Johnson became part of the Harmon Foundation which supported African-American art through its award for distinction within the African-American community.  The Harmon Foundation also arranged for exhibitions.  Alston refused to become a part of this organization, because he considered it a form of segregation.  He became the first African-American instructor at the Art Students League in 1950, remaining there through 1971, and he exhibited in numerous exhibitions, including a group show in the Metropolitan Museum of Art in 1950. His first solo exhibition took place at John Heller Gallery in 1953. He founded Spiral with his cousin Romare Bearden and Hal Woodruff in 1963, a group that addressed segregation in contemporary American society.  Alston's Girl in a Red Dress (1934) may be a portrait of Bessie Smith, whom he drew several times.  His murals, financed by the WPA, are still on view in Harlem Hospital.  Other murals were created for Golden State Mutual, the American Museum of Natural History, Public School 154, The Bronx Family and Criminal Court, and Abraham Lincoln High School in Brooklyn. 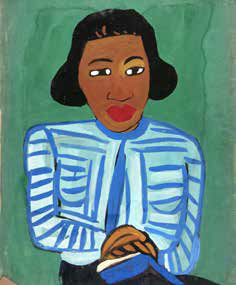 William H. Johnson enjoyed the heyday of the Harlem Renaissance and knew numerous major artists, white and African-American, throughout his active career.  He left New York in 1927 to study in Paris, then in the South of France.  There he met a Danish artist, Holcha Krake (1885-1944), whom he married in 1930, after returning to the US in 1929 and deciding to settle in Denmark in 1930.  In 1947, grieving from the loss of  Holcha, who died of breast cancer, his erratic behavior was diagnosed as syphilis-induced paresis. Sent back the the US, he spent the last 20 years of his life in Central Islip State Hospital. In his Portrait of a Woman with Blue and White Striped Blouse, Johnson demonstrated the influence of the School of Paris, particularly his appreciation for Matisse and Amedeo Modigliani.

Posing Modernity: The Black Model from Manet to Matisse to Today is one of the best exhibitions of 2018.  Please note that the Wallach Art Gallery is located on Broadway at 125th Street, on an angle with 129th.  They have extended their hours on Saturday and Sunday to 8 pm. The gallery is easy to find when taking the #1 Subway to 125th St.  Parking can be found in the area either in parking lots or on the street. In the case of the latter, later in the day may be the best time to find a spot.

Next month, Posing Modernity moves to the Musée d'Orsay in Paris to become part of Black Models from Géricault to Matisse (March 26-July 21, 2019).

Posted by nyarts-exchange at 1:18 PM 2 comments: