Suzanne Lacy's Between the Door and the Street; Creating a Stoop of One's Own 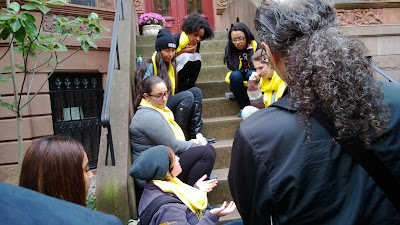 Maybe in L.A., where artist Suzanne Lacy lives, eavesdropping is a novel event. Here, in New York, it is routine - on the subway, in a bus, at Starbucks, by the cash register, and next to a person talking on his/her cellphone. Listening is what New Yorkers do most of the day - invited or not - when we are not talking (which we do the rest of the time).

As I understand it, Lacy initiated a performance piece entitled From the Door to the Street, sponsored by Creative Time, to focus on listening to groups in conversations.  Spectators were listeners, leaning in to overhear thoughts on significant issues addressed by activist groups, whose representatives sat on the stoops.  At the end of the performance, the conversing group broke the "fourth wall" and there was a block party with coffee and donuts for everyone. 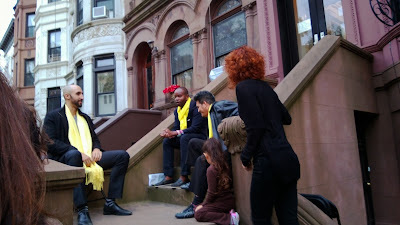 The topics ranged from immigration to aging; arranged marriages to adult children of divorced parents - the personal and the political, with the intersection of both very much in evidence throughout.

According to a post-mortem blog, the participants felt acknowledged and satisfied. However, as a member of the audience, my feelings remain mixed and unresolved, tarnished by my introduction to the event on the other side of a barrier at the entrance.  I was told that I could not attend the performance until the street was less crowded.  I used my About.com press card to get in.

So - I didn't like the feeling of exclusivity and being excluded.  As I wandered through the dense crowd of 'viewers," I discovered that it was difficult to hear the conversations from the street and judge the context for these random encounters.

Of the snippets of conversations I did hear, most did not "raise my consciousness" beyond what I generally know.  Listening to WNYC and NPR most of the day, every day, moves my heart far more than anything I caught last Saturday.

Instead, as I gazed upon this scene of these beautifully dressed women in a bourgeois part of Brooklyn, I felt ashamed: ashamed of standing around among artsy, pc people imagining this was significant.  For us, this adventure in social awareness would last a few hours. Then, we would take our shivering bodies inside for warmth, food and the next diversion.  And while we mused on "piecing together the strands of a complicated narrative coming from this intergenerational group" (according to the curatorial statement), millions of people worldwide would still suffer without basic human comforts. Is there something else we can do with activism in art or art in action which makes a dent in this unequal world?  I think so. 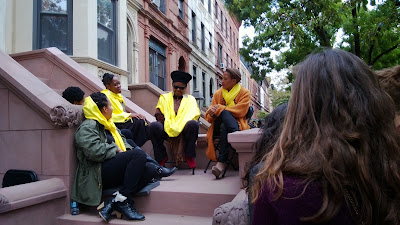 On the other hand, I do believe that Lacy's project was initiated in the spirit of good will. As people came off the stoops, conversations between the audience and the participants generated connection. This was the good part.  I spoke to several women whom I hope to meet with again. I hope that these encounters will lead to genuine friendships and fruitful projects in the arts that engage people outside the confines of this one block. 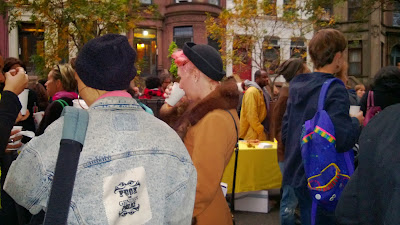 Artist Clarity Haynes put the performance in perspective for me.  She wrote in an email:


"I've been thinking a lot about the differences in art and activism, and what it means for a project to combine elements of both.  I thought the piece was heavy on the activism. The limitations, to me, of activism are the literalness, the lack of imagination in the discourse and presentation. The lack of humor.  There was a straightforwardness about it that, if I were to critique it, I would point out. Still, I do at the same time see that there was something special about its totality, the location, the parameters etc that does add up to something ineffable, more than the sum of its parts. In short, which make it art and not just activism."


I agree with Clarity.  As a work of art, the performance looked wonderful.  As activism: meh.  We can do better, New York.

In view of this criticism, I decided to create a stoop of my own - an inclusive stoop which invites conversation among all the people in the room. 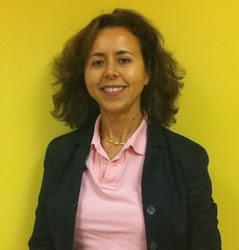 Please join me on "my stoop" on Saturday, November 9th at 4 pm at Fridman Gallery. We will engage in a conversation with anthropologist Habiba Boumlik, assistant professor at La Guardia Community College, devoted to "The Middle East and Women: Past and Present." Professor Boumlik, who comes from Morocco, is an expert in the field.

We welcome your questions, concerns and opinions.  Most of all, Professor Boumlik will be happy to explain the fundamentals if you are still confused: what is the difference between the Sunnis and Sh'ia; what is the difference between wearing a burka (full covering) and a hijab (headscarf); what is sharia, the law of Islam, and how does it influence the emerging political situations in the Middle East?  Plus, what should we know about Syria?

Our "stoop" is located inside Fridman Gallery, 287 Spring Street (between Varick and Hudson Streets), toasty warm, free of charge and open to the everyone - children too.

Feel free to share this invitation with your friends.

Posted by nyarts-exchange at 8:58 AM No comments:

Janie Cohen, Director of Fleming Museum, UVM, on "Staring Back: Picasso's Demoiselles," a lecture at Fridman Gallery, October 16 at 7 pm 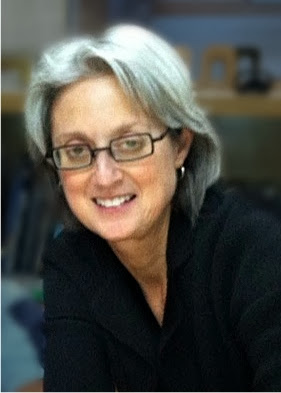 Is there anything new to add to our numerous analyses of Picasso's shocking Demoiselles d'Avignon (1907)?  Plenty - including one idea that has been staring at us for all their 105 years.

Janie Cohen, director of the Fleming Museum at the University of Vermont and internationally published Picasso scholar, promises to explain all this to you and more on Wednesday, October 16th at 7 pm in the Fridman Gallery, 287 Spring Street (between Varick and Hudson Streets).

Free and open to the public, this is one Demoiselles lecture that will not only add to your iconographic arsenal on this radically revolutionary painting, but will change your mind about yourself in relation to viewing this work of art.  Get ready to be surprised and enthralled by Janie Cohen's convincing new research on Picasso's notorious brothel.

For more information, please click on the press release.  Ms. Cohen's lecture is the second in the New York Arts Exchange Fall 2013 Lecture Series at the Fridman Gallery.

Copies of The Demoiselles Revisited (wherein I say my piece on the painting) will be on sale in the gallery.

Here's looking at you -

Posted by nyarts-exchange at 11:59 AM No comments:

Last Call: Hopper's Drawings and Paintings at the Whitney through October 6 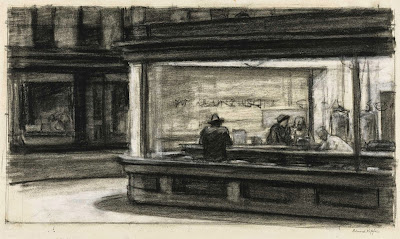 Josephine Nivison Hopper (1883-1968) bequeathed over 2,500 drawings by her husband Edward Hopper (1882-1967) to the Whitney Museum.  The exhibition Hopper Drawings offers the opportunity to study dozens of the drawings from this gift in the same room as the masterpieces which have made Edward Hopper one of the most beloved artists in American art history.  (And judging from the enormous turnout in Paris, we might say mondiale - worldwide.)  If you have not visited the Whitney Museum's exceptional show, please make a point to stuff it into you schedule by the end of the final day, Sunday, October 6th.  This Hopper show is one of the best (among the greats) ever mounted. 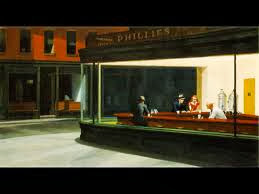 One of the glorious aspects of the New York show is the opportunity to see Nighthawks sketches right next to the painting.  What is the women in the red dress holding?  In the sketch, it seems to be a sandwich.  We also see that in one drawing of 1941 or 1943 the couple seems pretty chummy - a far cry from the painting's characterization of the couple, and all the figures in this all-night diner.  Most viewers consider Nighthawks a pictorial comment on urban alienation.

In the same gallery, another well-known Hopper painting, Early Morning Sunday, sits on an easel, which Hopper used in his Washington Square studio. 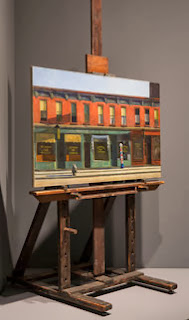 For more information about Hopper and the exhibition, please visit the Whitney Museum's exhibition page and read Robin Cembalest's article about Nighthawks posted in July 2013 on the Art News website.

Posted by nyarts-exchange at 8:20 AM No comments: