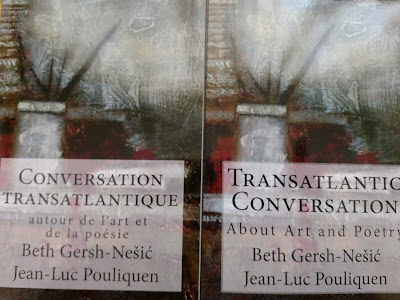 You are cordially invited to a

join us on Google Hangouts using bethnewyorkarts@gmail.com
(Make a reservation to receive our call by writing to this email address)

Posted by nyarts-exchange at 5:44 AM No comments: 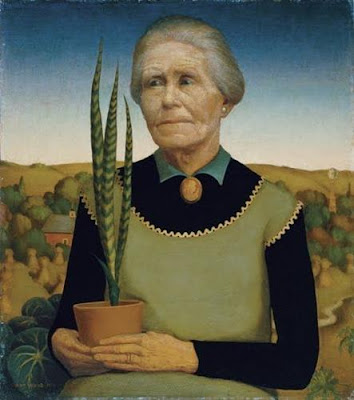 Repeating my Mother's Day 2016 New York Arts Exchange blog post because it was dedicated to my mother, Mildred Gersh - her last Mother's Day with us. Plus the Grant Wood painting is featured in the current Grant Wood retrospective at the Whitney Museum, closing on June 10th (a terrific show).

Happy Mother's Day to you and yours.  This blog post is dedicated to my mother, Mildred Gersh, who gave me a love for art through our many visits to museums.  Thank you, Mom.

Please make visits to museums a frequent and pleasant experience for your family.  Take your children and grandchildren to a museum for a short time - an hour or so.  Not too long.  Just enough time to whet the appetite for more, another day.

Also, have the children select a reproduction in the bookstore as a souvenir of the trip to the museum. The purchase not only supports the museum, it also extends the experience past the doors of the museum and into one's personal space, one's comfort zone.

I urge you to frame these museum reproductions so that they hang in the child's bedroom, creating a personal connection that will last a lifetime. 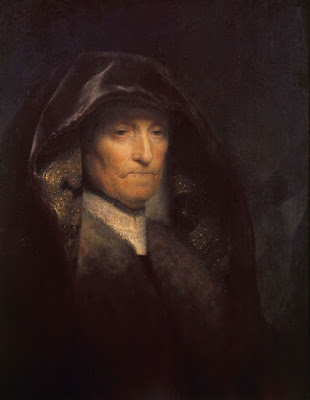 Rembrandt's mother's face is familiar to us through other works wherein she served as his model. 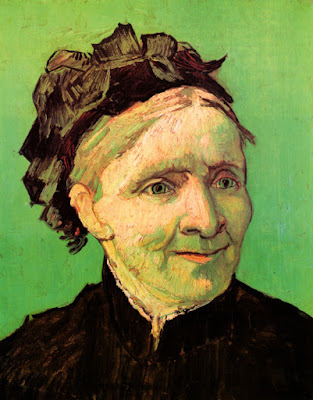 Almost smiling, Anna van Gogh seems to listen intently.  She provided solace for her son when he was at odds with his father. An artist in her own right, she too studied art and drew plants and flowers in notebooks. 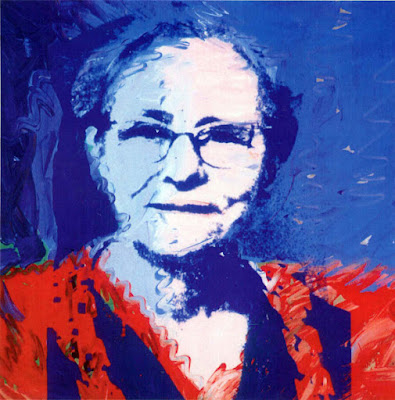 Julia Warhola is truly the Mother of Pop Art.  Her charming European script graces most of Andy Warhol's early works, such as the greeting cards and clever books. Examples of her work are currently on view at the Morgan Library in the exhibition Warhol by the Book, which closed on May 15, 2016. 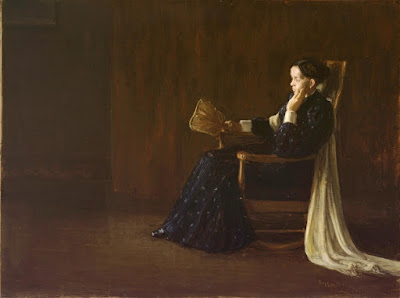 Henry Ossawa Tanner's mother, Sarah Elizabeth Miller, was the eleventh child of a slave who sent her children to freedom through the Underground Railroad.  She arrived in Pittsburgh, sponsored by the Pittsburgh Abolitionist Society.  Sarah Miller married Benjamin Tanner, a college-educated teacher and minister who became the bishop of the African Methodist Episcopal Church in Pittsburgh.  Henry Ossawa Tanner was born on June 21, 1859.  The only black student in Thomas Eakins' class at the Pennsylvania Academy of Art from 1880 to 1888, he moved to Paris in 1891, where he enjoyed success as an artist.  He returned to the US for a short time (1893-94) to set up a studio, but was not as well received as in Paris. He returned to France, where he married the Swedish-American opera singer Jessie Olsson and they lived out their lives together. This portrait of his mother may have been painted during a visit to his mother's home or during his mother's visit in Paris.  Another portrait of his mother belongs to the Smithsonian American Art Museum.

Happy Mother's Day to you and yours -
Beth New York

Posted by nyarts-exchange at 7:47 PM No comments:

Pablo Picasso, Girl with a Basket of Flower, 1905

What a weekend we have had, from the Frieze extravaganza on Randall's Island to TEFAF at the Park Avenue Armory at 67th Street and The Moniker Art Fair in Greenpoint,Warehouse in Brooklyn.  A veritable tsunami of art opportunities, wall-to-wall, in each venue.  If you missed any or all of the May Art Fairs this week, click on this article in Hyperallergic that summarizes the best in Manhattan and Brooklyn. 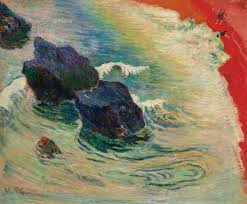 However, the most powerful gush of art force has to be the Collection of Peggy and David Rockefeller sale at Christie's, slated for auction on Tuesday evening, May 8th at 7 pm and Thursday morning, May 10 at 10 am.  The expectations already have hearts pounding like the surf in Paul Gauguin's dizzying bird's-eye view of the Le Pouldu. tersely entitled Wave.  This paintings alone will surely fetch buckets of money that Gauguin could have used way back in 1888. (Click on the auction catalog essay for the details surrounding this painting, executed during one of the artist's lengthy sojourns in Pont-Aven, Brittany - January through October, preceding his famous roommate kerfuffle with Vincent van Gogh that ended abruptly just before Christmas.) 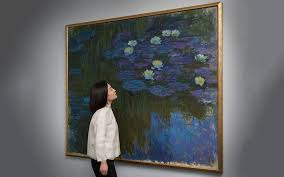 Another tidal wave of cash will definitely come from the late Monet Waterlilies in Flower, completed before he started the ambitious waterlily murals on view at the Musée de l'Orangerie, virtually on view right  here.  No doubt this WWI period piece shows off  this Impressionist's evergreen range while in his 70s.  His youthful exuberance teeters on the cusp of abstraction. 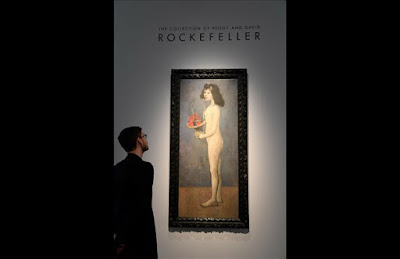 Pablo Picasso's Girl with Basket of Flowers (once called La Fille au Pavé) at
Christie's, May 2018

Still - my bets are on Picasso's Girl with a Basket of Flowers, painted during the autumn of 1905, as the all-out top seller for the whole auction.   This work belongs to the year Fernande Olivier moved into Pablo's pad in the squalid Bateau Lavoir.  Similar in sobriety to Boy with a Pipe, 1905, wherein a serious young man dressed in a worker's blue outfit is crowned with roses (a gesture that turned the mundane into the otherworldly), this careworn young lady also wears her professional attire - nothing.  Clutching her straw basket brimming with red smudges of some sexually suggestive blooms (poppies, roses, anemones - the tears of Venus as she mourned the death of Adonis), we note all the obvious absences: clothes, context and individual identity.  Who is she in the painting? She is a model, pure and simple, and one who probably beds the artist between poses.  She is young, she is  pretty, but she is not happy.  Rather, she seems bored or just dog tired.  She is tired of holding the basket and she is tired of the life she is forced to live.  Picasso knew Manet's famous painting of a prostitute Olympia, wherein the flowers were handed to her maid by the one who entered her chamber (you).  Picasso's poor street urchin, identified in Jean-Paul Crespell's book Picasso and His Women (1967)  as Linda La Bouquetière, can't afford this luxury.  She was a local flower seller who seems to be no more than 16 years old.  Picasso's choice of expression inspires sympathy.  Like Olympia and all of her sisters, this child, who anticipates womanhood in full flower, will age quickly, like the rosy red petals in her basket.  Her oddly aged face seems to predict this outcome. 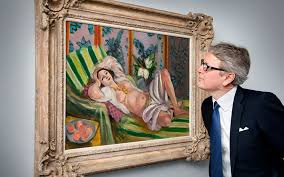 So - have your picked your favorite?  Virtual paddles ready for the BIG NIGHT.
Turn in online to witness this inevitable historic occasion.

And may the best bidder win!
Cheers,
Beth

Posted by nyarts-exchange at 7:21 AM No comments: