Face Painting in the Dark: Poems by Ann Cefola 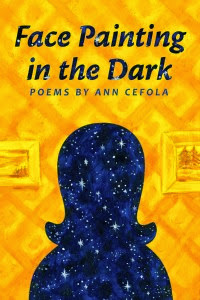 Ann Cefola paints with poems: still lifes, landscapes, self-portraits and other works of art.  She is a visual artist, as surely as those who delineate with brush or pencil.  She shapes, carves, digs in and reveals.  Peeling away layers of optical appearance, she mines for meaning, creating a personal iconography of circumstance.

In “Teint Pur Mat,” Cefola begins our reading of the poem with a French proverb: “Il fait dur d' être jolie (It's hard to be pretty).”

In white slip like lace, close to mirror, my mother fills
eyebrows with Charles of the Ritz gold pen.

Chanel No. 5's scent glossy and brown as her mink stole, dabs
from a square bottle.  Touch & Glow, shaken hard in one hand.

And so the poet continues to describe the intimacy of a woman's toilette observed by her daughter, the room suffused with “pharmaceutical scents” sprinkled, sprayed and poured into use that become the heirlooms of experience: habits, products, gestures and olfactory associations.  These moments of watching and waiting transition into joining the female tribe by enacting rituals of beautification.

pale frosts of junior high.  How makeup marks my life;
Elbowing at the girls' room mirror, I draw

And contemplate: ruminating over this fashioning of the mask, this living inside and outside of the body:

help me get closer to my true snakeskin.
To swim toward grace, she knew what must be applied.

Along with these evocative images – the optical, the physical, the invisible and the remembered – which interact and overlap, simultaneously, like a Cubist's collage, there is sound: a voice that too sketches out the scenery, as in "Sugaring"

At the pancake house, I say Blueberry, you say Cinnamon Sugar.

Thankfully, Cefola includes her masterpiece “Demoiselles 7,” which I have enjoyed for lo these seven years since we worked on our respective “Demoiselles” for the 100th anniversary of the painting's birth (mine was the catalog essay for an exhibition; Ann's her magnificent dialogue between the five prostitutes and art history):

To give and daily be discarded.
To live a heaviness in limb,
to feel  one's blood finely carbonated,
to sink back into empty pupils.
You blame Braque, Léger, Gris
They saw the world vibrate, could see the other side.
They heard the discordant violin, broken guitar.
They knew the danger of still life.

Picasso's ladies talk back, released from their stationary poses, to rant about the issues that still plague humankind:

We Demoiselles that changed the world,     and didn't.

As we travel from page to page, following the poet alight on urban and rural terrain, capturing the very essence of existence in all its vibrant or drab quotidian colors, we eventually face death itself in her poem “Road to Windsor,” dedicated to Susan Hall Anthony (1930-2009), co-founder of the New England Writers Association.

There she is, shimmer and light,
about to loose the body like an old nightgown.
I offer useless prayers.  Embrace her a second, last, time.
She holds on as if spirits speak in dialogue no one can hear.

This mural-like existence no less than two women, a portrait,
a Vermeer.  Love doesn't go away, I say.  She knows.
I put my hands at my heart in Namaste,
a gesture she returns.

And so the poet heads for home through the Vermont farms and Main Streets as we too take our leave from this journey through a virtual exhibition of Celofa's perceptive imagery:

Green hills home to sheep and dog, black-eyed Susans bright.
The envelope that folds in on itself,
daylilies that close at night.

Chuffed, we look forward to another Cefola collection.

Ann Cefola's Face Painting in the Dark was published by Dos Madres Press in 2014.   Her other collections of poems are St. Agnes, Pink-Slipped published by Kattywompus Press in 2011 and Sugaring published by Dancing Girl Press in 2007.  She also translated Hélène Sanguinetti's poem Hence this Cradle published by Seismicity Editions in 2007 (enjoying the Witter Bynner Poetry Translation Residency at Santa Fe Art Institute to prepare).  Cefola received the Robert Penn Warren Award, judged by John Ashbery.  She earned her MFA in Poetry Writing from Sarah Lawrence and still lives in New York.