Beth's lecture on January 7th - Last Call for January and the Winter Holidays! 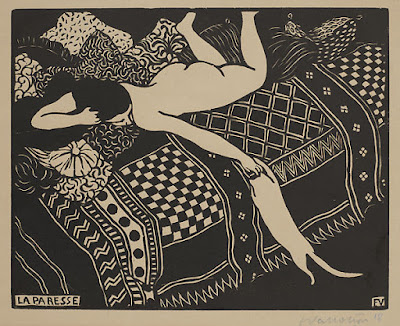 Today is Three Kings Day, "Little Christmas" and Christmas Eve for members of the Christian Eastern Orthodox churches. Thank you, Hyperallergic, for providing the list and a great source to keep us up to date on art happenings and issues. If you haven't subscribed to Hyperallergic, yet, please make that your New Year's resolution.  Thank you, Hrag Vartanian, for a great online art magazine that is absolutely free!

Félix Vallotton's print, Laziness, is part of a wonderful exhibition of this Swiss artist's paintings and prints at the Metropolitan Museum of Art, through January 26th.  The show is located in the Lehman Wing, so it's a small selection of his work - not too taxing for the weary.

Also, Vallotton and other non-French artists will be featured during my lecture at the Byram Shubert Library, Greenwich, CT on Tuesday, January 7th - that's tomorrow - at 5 pm.
The title is "When Modern Art Came to Paris: Immigration and Assimilation." The talk will highlight the great artists who came to Paris and contributed to modern art when this "City of Light" was the mecca for all aspiring artists. Those who stayed, the immigrants like Vallotton, belong to our concept of "French art."  Vincent van Gogh, Pablo Picasso, Sonia Delauney, and Amedeo Modigliani were other immigrants who established their careers in France and became part of the French avant-garde during their respective lifetimes.  On January 24, 2020, we honor the 100th anniversary of the  death of Modigliani.

I hope you will be able to join us at the Byram Shubert Library at 5 pm - it's free and open to the public.

Other exhibitions that are closing:
Metropolitan Museum of Art:
Vija Celmins, through January 12 (at the Met Breuer).
The Cloisters: The Colmar Treasures: A Medieval Jewish Legacy, through January 12.
The Last Knight closed on January 5th - here is the exhibition page to view online.

Museum of Modern Art:
Michael Amitage, through January 20
Energy, through  January 26
Betye Saar: The Legends of a Black Girl's Window, closed January 4 - here is the exhibition page to view online.

Posted by nyarts-exchange at 12:47 PM No comments: Links to this post 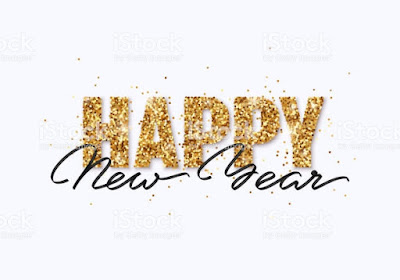 Wishing you peace, joy and plenty of art adventures in 2020!

Posted by nyarts-exchange at 11:50 AM No comments: Links to this post 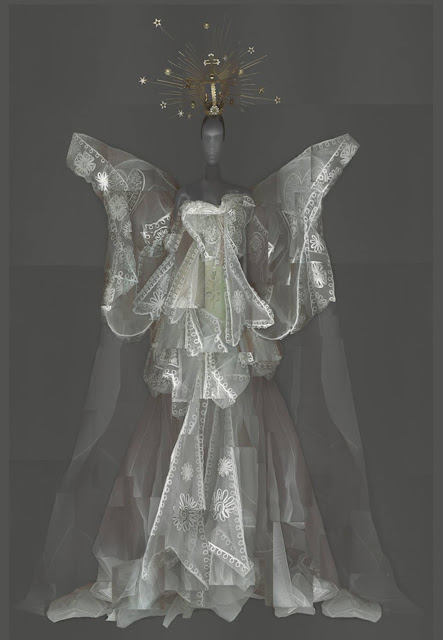 
And a Peaceful New Year!

Posted by nyarts-exchange at 10:14 PM No comments: Links to this post 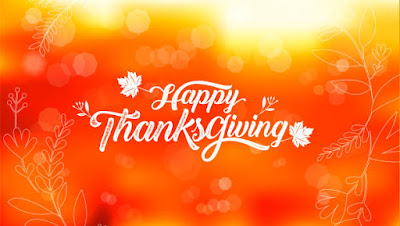 The New York Arts Exchange
Posted by nyarts-exchange at 10:16 AM No comments: Links to this post 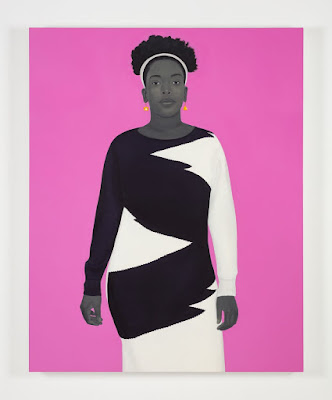 Amy Sherald, Sometimes the king is a woman, 2019

It's been a spectacular fall weather-wise and art-wise: The Museum of Modern Art reopened on Monday, October 21st, the Felix Vallotton will open this Monday, October 29th at the Met (closing January 26, 2020) and the elegant TEFAF  art fair will fill the Park Avenue Armory November 1st - 5th. 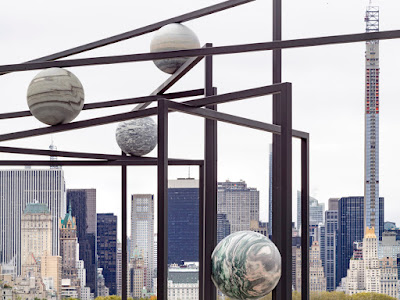 Please join us at Beth's Public Lectures and Panels this fall: 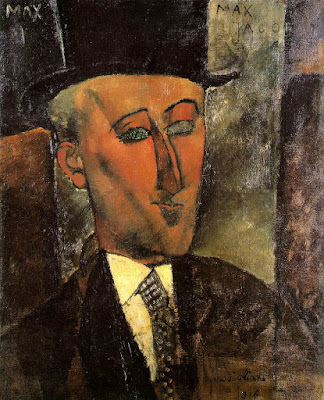 Monday, October 28th - "When Modern Art was 'Jewish': The Anti-Semitic Campaign Against Cubism and the School of Paris," Shames JCC, Tarrytown, 10 - 11:30 am. 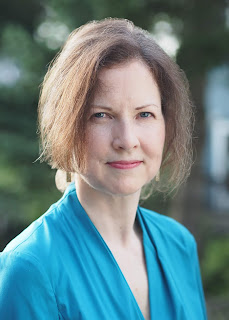 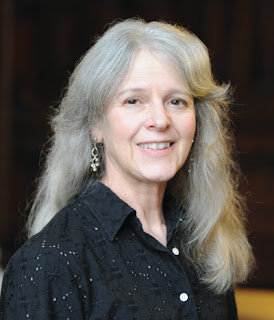 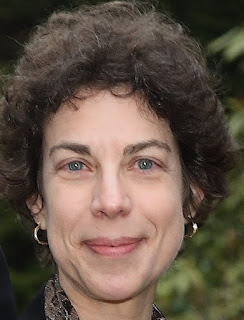 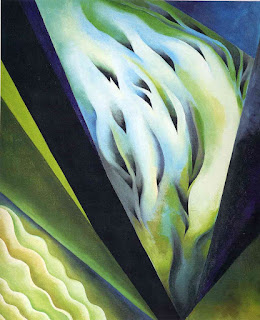 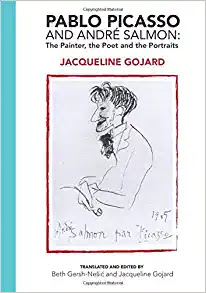 Our first publication is Professor Jacqueline Gojard's book Pablo Picasso and André Salmon: The Painter, the Poet and the Portraits (Za Mir Press, 2019), available on Amazon.

As for  teaching art history, some of you know that I retired from Purchase College and joined the faculty of the College of New Rochelle last fall as an adjunct.  CNR closed in August and Mercy College, which took over CNR, hired me back.  I taught at Mercy on and off from 1994-2013.

Please keep in touch and let us know if you have exciting exhibitions, books or other events that you would like to announce through the New York Arts Exchange.  Write to Beth at nyarts.exchange@verizon.net

Hoping to see you this fall -
Beth

Posted by nyarts-exchange at 6:47 AM No comments: Links to this post 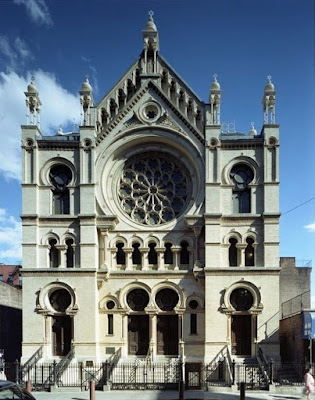 The world's populations have been in flux for millennia, but now, it seems, more than even, concerns about migration and immigration dominate the news every day. The planet may be in crisis and immigration may be among the symptoms that point to the urgency of the situation. Wars, crime, slavery, pogroms, economic opportunity, and climate change have been the major forces driving people to move to different lands. In most cases, there is a need to escape hardship and find a better life. 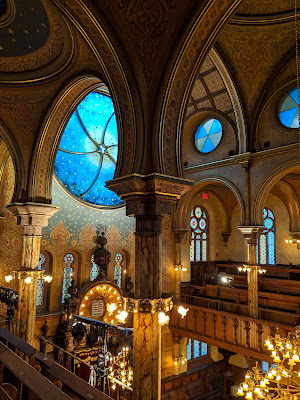 View of the main sanctuary from the Women's Gallery
Photo: Beth S. Gersh-Nesic

The Museum at Eldridge Street regards its existence as a chapter in the New York immigrant experience. The museum is a 19th century synagogue built by a Jewish Russian population living on the Lower East Side. It was completed for this Orthodox congregation called Kahal Adath Jeshurun in 1887 to serve this mainly Eastern European (Ashkenazi) tradition of Judaism.  The Museum at Eldridge Street is the only Jewish synagogue open to the public as a place to educate and share multicultural programming. To access an introduction to the Museum of Eldridge Street, visit their website which explains the building's restoration (rededicated in 2007) and their permanent collection. 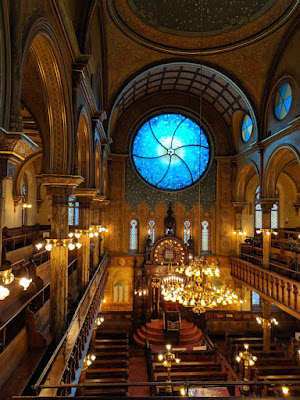 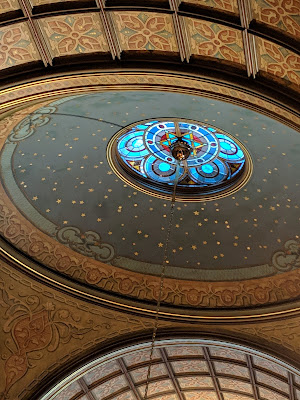 View of the stained glass window in the ceiling
Photo: Beth S. Gersh-Nesic

For more information about the museum's mission, please read this interview with the museum's wonderful archivist and curator Nancy Johnson. Since the fall of 2016, she has either organized or overseen the exhibitions and programs for The Michael Weinstein Art Gallery within the museum. Her exhibitions have made a significant contribution to this burgeoning arts community.  Please subscribe to their email blasts for news about their active schedule of programs, such as the ones listed below. 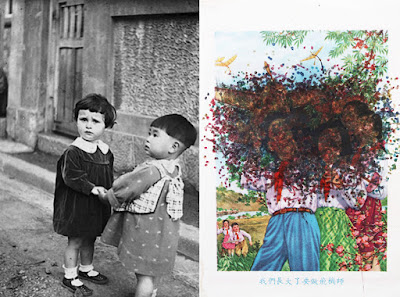 Photo: Courtesy of the Museum at Eldridge Street

Today, the Museum at Eldridge Street stands among the bustling streets of Chinatown and the exploding Lower East Side (LES) gallery scene stretching in all directions around the New Museum on the Bowery.  Located at 12 Eldridge Street, the museum is a mere hop, skip and jump away from the magnificent Manhattan Bridge.  From there, myriads of diverse ethnic adventures beckon - cafés, restaurants, boutiques, and food markets galore. 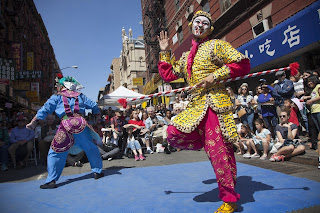 With this in mind, the museum offers the annual June event  "Egg Rolls, Egg Creams and Empanadas," an exciting day of art, dance, street performances, and music - lots of music.  This year's celebration was especially memorable because Harbin, China: Past/Present, an exhibition about Jews living in Harbin, China, filled the museum's beautiful Weinstein Art Gallery. 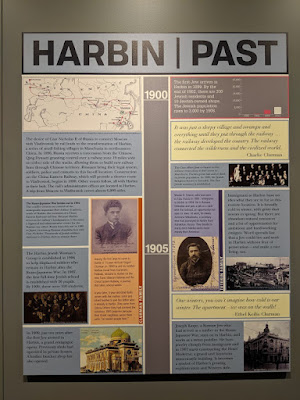 Harbin alone deserves a long, relaxed visit, before or after a tour of the synagogue.  Richly detailed in its educational presentation, Nancy Johnson has curated an excellent combination of photographs, text panels, and narratives about a few Russian emigrés who settled in Harbin and raised their families. The history of Jews living in Harbin begins in the late 1890s and ends in the 1960s. 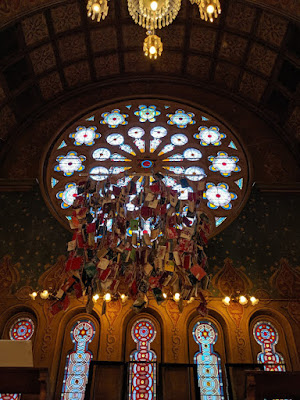 The Harbin exhibition includes a contemporary art component produced by the New York artist Steven Lane, who works in Harbin during the summer, when he is not teaching at Keio Academy of New York, a Japanese-American high school located in Purchase, New York.  Photographs of Lane's work in Harbin as well as his prints and glorious installation in the Women's Gallery ably connect Harbin of the past to the present, hence the title of the show. 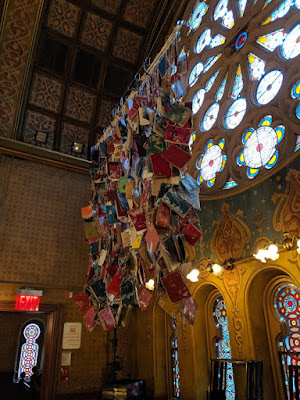 The history of the Jews settling in Harbin, previously a cluster of villages in Manchuria, begins with the Russian invasion of Manchuria and the subsequent Russo-Manchuria Treaty of 1897.  Then Jews immigrated to Harbin to build the Chinese Eastern Railway. The whole enterprise created a modern urban oasis of freedom for Russian Jews who were extremely restricted and unwelcome in their homeland. By 1903, 500 Jews lived in Harbin. By 1908, there were 8,000. For more information online, please read Dr. Irena Vladimirsky's article "The Jews of Harbin, China," 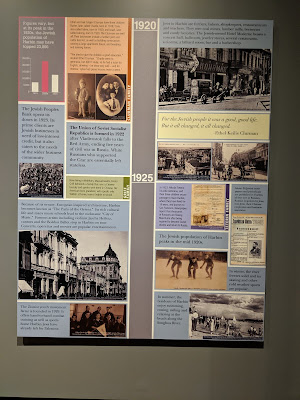 Tours of the Museum at Eldridge Street, a typical Moorish Revival style synagogue inspired by mid-19th century synagogues in Europe, like Dohany Street Synagogue in Budapest, are available during the days the museum is open.  Check out their website for details.

Three important activities in September and October:
Thursday, September 12:
Artist's Tour of the Exhibition: Steven Lane, at 5:45 PM.
and
"Jewish Lives in China," at 6:30 PM.
Lectures by Professor Jim Ross, Department of Journalism, Northeastern University; Irene Clurman, a journalist from Colorado, who maintains a website on Harbin; and Varda Yoran, born in China in 1929 of parents who emigrated from Russia.
Details and tickets available on the museum's website.

Wednesday, September 18, 6:30 PM:
"EastRiver Ensemble Concert," a mixture of Chinese and other kinds of music.
Tickets are available here. 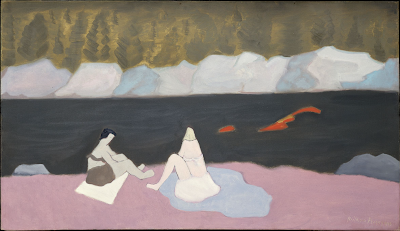 Labor Day is nigh and the end of summer is here!  I sincerely hope you all had wonderful summers with friends and family, whether here in New York or far, far away.

Now is the time to catch the last days of the New York Summer Season's best exhibitions, each closing very soon. Here is the list: 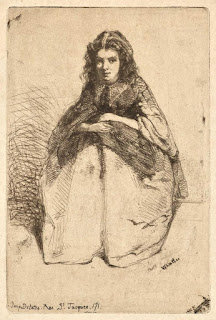 Summer with the Averys: Milton, Sally and March, and Sharks! Bruce Museum, Greenwich, CT, September 1.  (This one venue is perfect for the family as both exhibitions are suitable for children of all ages.) 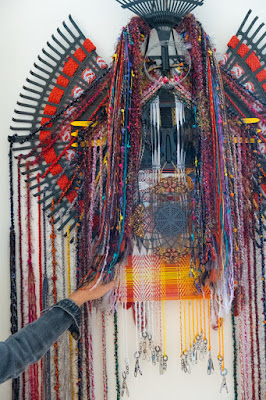 Next weekend:
Camp: Notes on Fashion, Metropolitan Museum of Art, through September 8.

Leonard Cohen: A Crack in Everything, The Jewish Museum, through September 8.

Hogarth: Cruel and Humor, Morgan Library and Museum, through September 22. 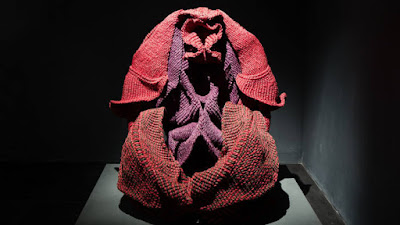 From Manet to Picasso: The Thannhauser Colllection, Guggenheim Museum, through September 29.

Posted by nyarts-exchange at 9:55 AM No comments: Links to this post